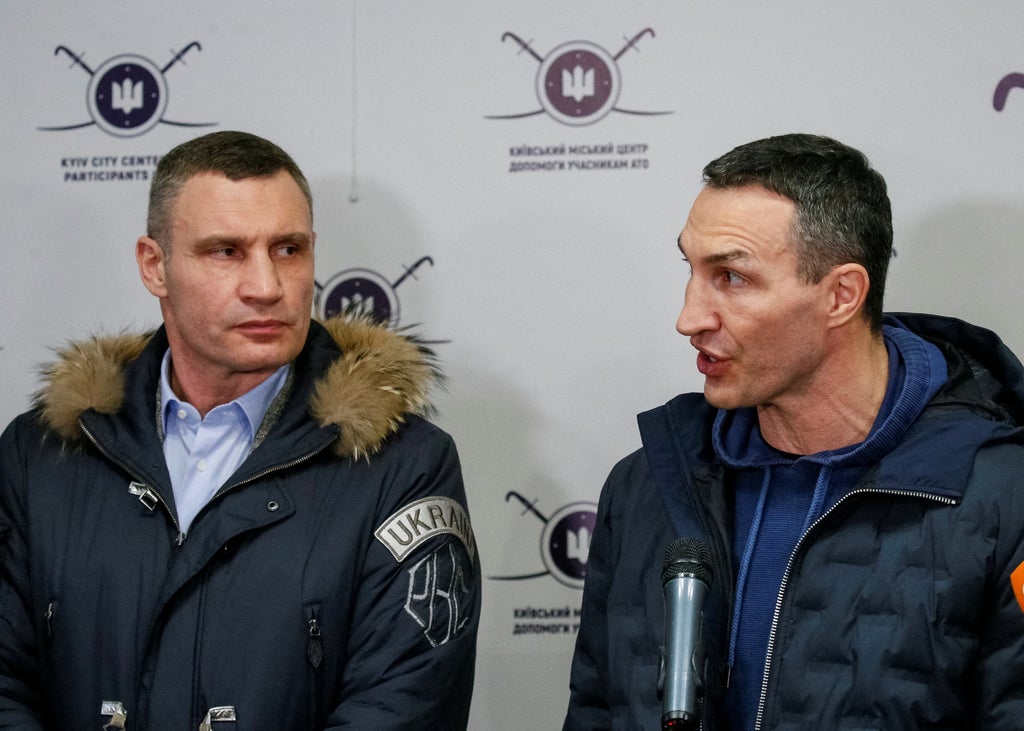 The Klitschko brothers were brought up by their mother Nadezhda and their father Vladimir, a proud Soviet man who rose to become a high-ranking military officer. It was a job which afforded his two sons Vitali and Wladimir their high-quality education, and instilled a disciplined streak which sowed the seeds of a boxing dynasty. It is a strange twist of fate, then, that the brothers should now be drawn into a bloody war against Russia, the nation their father dedicated his life to.

Vladimir eventually gave his life for Russia, too. He was a USSR military commander at a nearby airbase when the Chernobyl power plant exploded on 26 April 1986, and he was one of the first on the scene. He repeatedly travelled into the disaster zone helping to organise the clean-up operation with little understanding of the dangers, while his wife and young sons were only 60 miles away. Vladimir died from lymph node cancer aged 64, which doctors linked to his exposure to radiation. A decade on from their father’s death, the Klitschko brothers are now taking up arms after Russia’s invasion of Ukraine. “I don’t have another choice, I have to do that, I’ll be fighting,” the 50-year-old Vitali, now mayor of Kyiv, said on Friday.

They grew up with strong military influence and under the impression the United States could unleash catastrophic war at any moment. Younger brother Wladimir told Grantland in 2011: “When I was 12 I was shooting AK-47s, handling hand grenades, running through underground tunnels, practicing drills, and studying how to get along with tank attacks.”

They took up combat sports from an early age: Vitali competed in boxing, kickboxing and karate with great success in all three, while Wladimir began his boxing training in Brovary on the outskirts of Kyiv before moving to Warsaw to work with better coaches. Aged 17 he became the heavyweight Junior European Champion, and two years later his older brother Vitali won gold at the 1996 Military World Games in Rome.

That year Vitali also graduated from university and began his postgraduate course which would earn him a PhD in sports science; Wladimir achieved the same qualification, earning them the boxing nicknames Dr Steelhammer and Dr Ironfist.

Two glittering boxing careers followed as they embarked on an era of dominance for more than a decade from the turn of the century (they kept a promise to their mother never to fight each other). Vitali became a heavyweight world champion in 1999 but famously lost to Lennox Lewis in Los Angeles in 2003, one of only two defeats; despite a long career spanning three decades, Vitali was never once knocked down. Wladimir first became world champion in 2000 and later unified the division before a string of successful title defences, before eventually succumbing to Tyson Fury in Germany in 2015.

Out of the ring, Wladimir began a relationship with diminutive American actress Hayden Panettiere, creating an eye-catching height difference between the 6ft 6in boxer and the 5ft star of NBC show Heroes. The pair, who have a daughter together, became engaged before separating in 2018. Vitali married Russian model and tennis player Natalia Egorova, and they have three children who have grown up knowing only a free, independent Kyiv.

Vitali moved into politics near the end of his boxing career, first as advisor to president Viktor Yushenko and later as mayor of the capital. Both brothers were prominent in the 2013 Euromaiden protests, the public backlash after president Viktor Yanukovych refused to sign a deal with the European Union and instead chose closer ties with Russian president Vladimir Putin. Yanukovych was overthrown and Putin has resented the loss of an ally leading Ukraine ever since.

“My whole life I was told that the US was a horrible country,” Vitali told Grantland. “At some point, I always believed, I would have to defend my home country against crazy Americans who wanted to control the whole world.” The Klitschkos are now defending their home country, but it is the nation their father proudly fought for that they fight to resist.