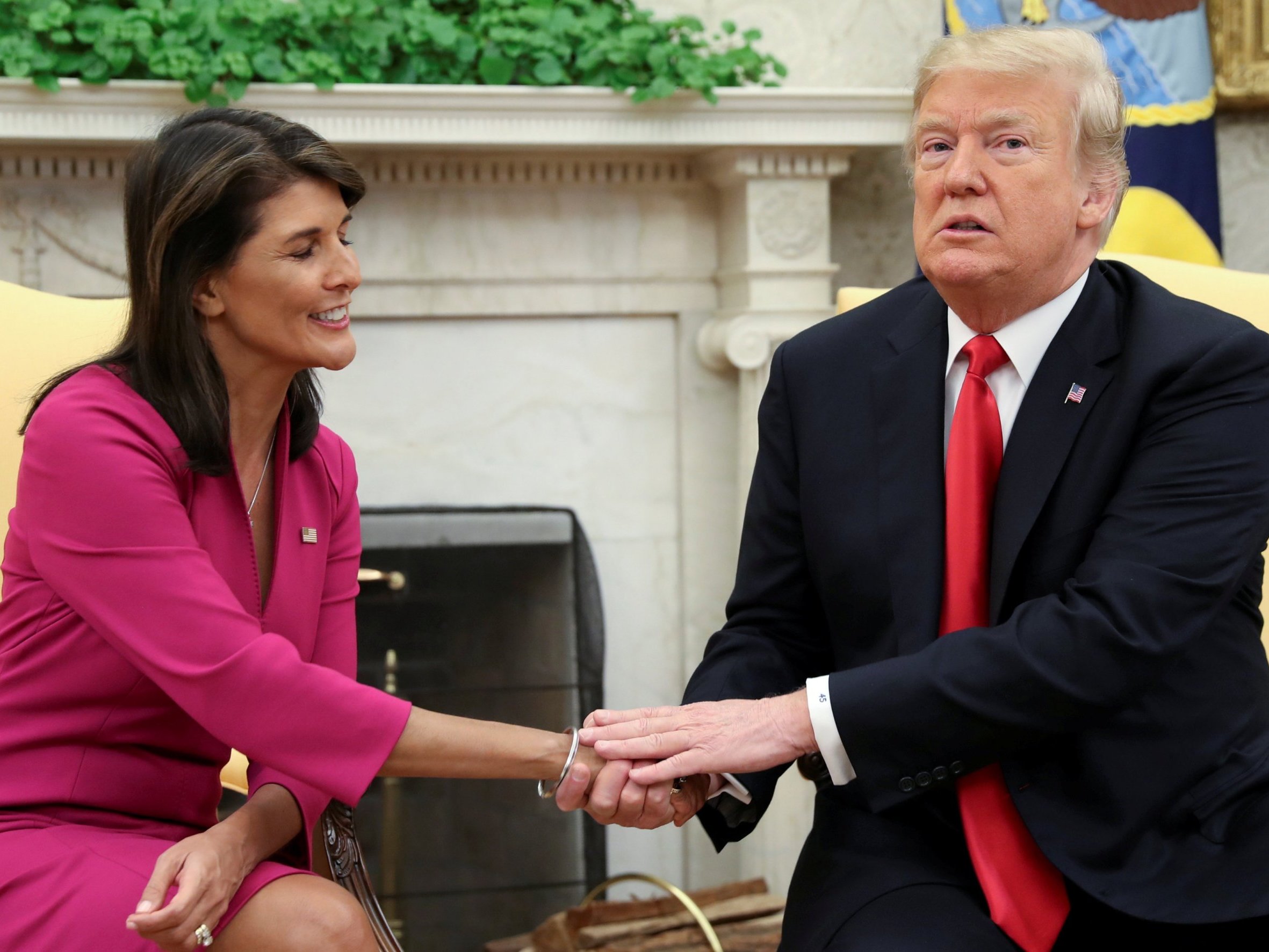 “Glamour” is the word Donald Trump used to describe what US ambassador to the United Nations Nikki Haley had done to help raise the profile of her position.

It is the type of description the president appreciates given his showbiz leanings, with Haley having become one of the administration’s relatively few successful hires – in the eyes of Republicans at least – in a tumultuous first two years.

There is no doubt that Haley was box office, forcefully pushing Trump’s agenda of backing Israel and looking to reduce Palestinian refugee funding, decrying the Iran nuclear and withdrawing from the Paris climate accord. All unpopular policies internationally, Haley stood firm and also looked to attack bodies like the Human Rights Council calling for reform.

However, she also pushed further than the president in admonishing Russia for meddling in global affairs and attacking chemical weapon use in Syria, providing staunch support to allies like the UK and allowing the administration to point to her independence as a sign that it could “do” pragmatic international diplomacy.

With Haley having announced her departure at the end of the year and Trump suggesting his new nomination will come in “two to three weeks”, the difficulties start before a name can even be announced.

There have been multiple reports that Trump is under pressure to nominate a woman to the post – not surprising given the amount of criticism his administration faced over its lack of diversity. The loss of the Indian-American Haley reduces that number further.

Given that Trump has suggested the nomination will come before the crucial midterm elections – during which Republicans are already relying on male voters to prevent big losses – that seems a sensible choice. Trump is polling at low levels among women and the percentage of female voters has exceeded male voters at every midterm election since 1986 according to a study by Rutgers University.

Some Republicans have suggested that Trump should just pick the best person he can regardless of gender, but polls show that the bruising Senate confirmation for new Supreme Court justice Brett Kavanaugh, who faces allegations of sexual assault and sexual misconduct, has hurt Trump and the Republicans. Kavanaugh denies all allegations against him.

Trump will no doubt want someone he can trust to keep pushing his agenda, so changes in US foreign policy at the UN will likely come more via style than substance. However, with Haley having seen her influence diminish since Mike Pompeo took over as secretary of state, and the power wielded from the West Wing by hardline national security advisor John Bolton, the new UN incumbent may find very little room for manoeuvre.

Both men have expressed a preference for the UN position to be demoted from a cabinet-level position to be being under the control of the secretary of state. Trump had broken with recent Republican tradition in making it a top-level post and Pompeo is said to want someone to follow his leadership. As for Bolton, he would like someone who could continue his career ambition of dismantling international law that constrains national sovereignty.

There are others in the White House who would potentially seek a more Wall Street and business-friendly candidate not so opposed to a more globalist outlook. One such pick would have been former deputy national security advisor Dina Powell, who is a Goldman Sachs executive, but she ruled herself out of contention in recent days, having been the frontrunner.

Given the need for the post to be confirmed by the Senate and the recent protests and pushback over the Kavanaugh nomination, there appears to be a push for any candidate to have State Department or ambassadorial experience to help smooth the process.

Two names that have been circulating are Kelly Knight Craft and Jamie McCourt, both current ambassadors. Craft is the current ambassador to Canada and has earned praise for involvement in trying to hash out a stronger US/Mexico/Canada trade deal that has become a focus for Trump. She was previously an alternative delegate to the UN under George W Bush. In 2016, Craft and her coal baron husband Joe Craft donated millions to Republican candidates across the country, with Craft donating around $260,000 to the Trump Victory Fund.

As for McCourt, who is the ambassador to France and Monaco, she has played up for business links and talking about expanding economic links between the two countries, saying that at the beginning of its history America was “a startup and France believed in us”. The former attorney was a former co-owner and executive for the LA Dodgers baseball team.

Beyond those two, Nancy Brinker, the founder of the Susan G Komen foundation, which looks to help end breast cancer, is also a strong candidate. A former ambassador to Hungary who worked in the State Department for George W Bush, she has strong credentials and has known the Trump family for decades. However, she would likely face difficult questions in the Senate about stepping down as CEO of the foundation in 2012 shortly after the group cut off grants to Planned Parenthood. The foundation would reverse that decision after a dip in donations.

There has been chatter about current ambassador to Germany Rick Grenell, a favourite of Bolton. However, there were concerns about his past undiplomatic behaviour before he took that role and his aggressive style has ruffled feathers in Berlin. Current Interior Secretary Ryan Zinke has made it clear he would like the job, having implemented parts of Trump’s pro-business/anti-environment agenda.

The current outsider of those linked to the post is former New Hampshire senator Kelly Ayotte, who lost a close race in 2016. Helping get Supreme Court judge Neil Gorsuch confirmed as one of the first big wins for the Trump administration raised her profile, but she has said that she does not see Trump as a role model, telling CNN earlier this year: “I’m not sure that’s where I want my children to turn.”