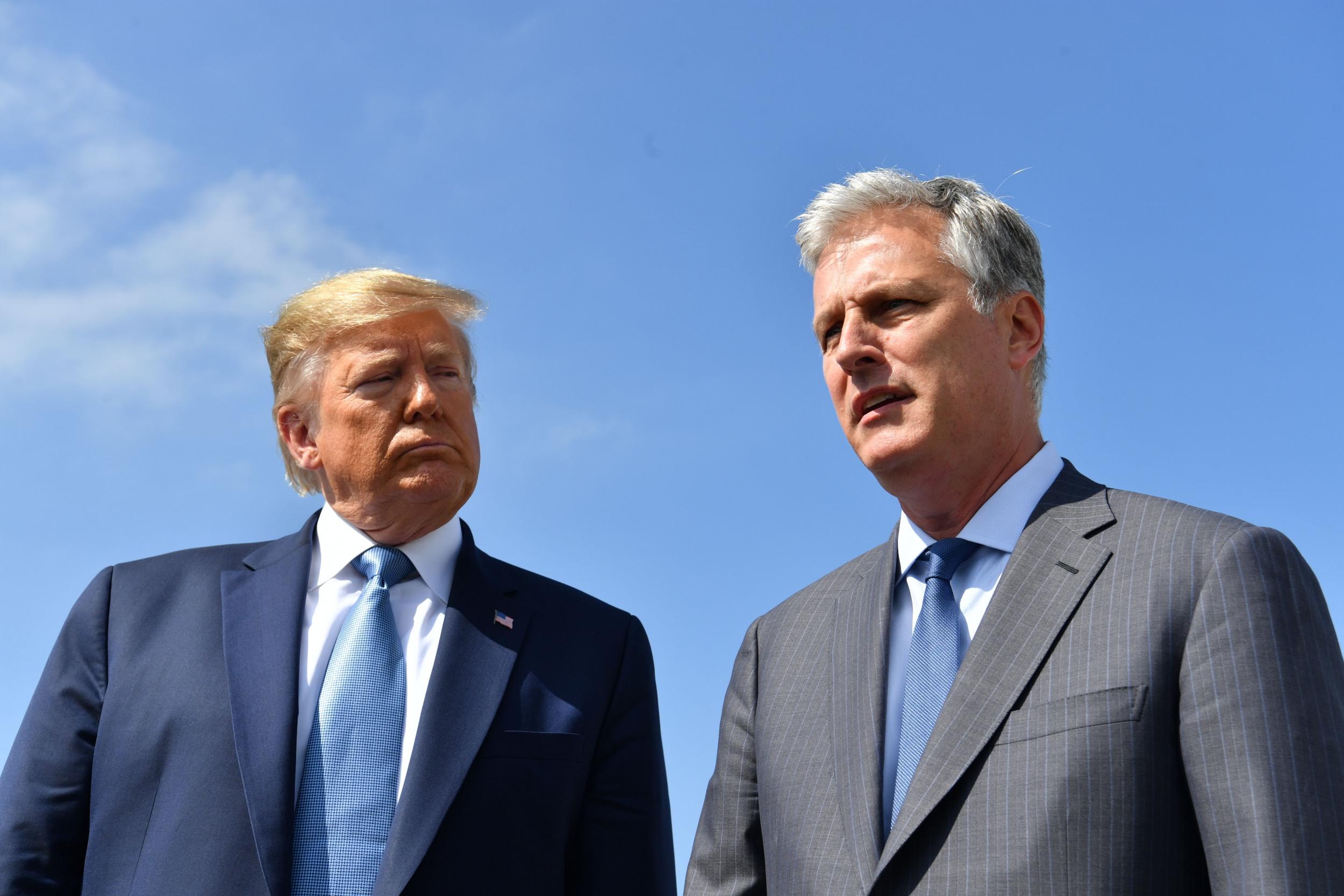 A top Donald Trump adviser has suggested rising global anti-semitism would force the expansion of the illegal Israeli settlements encroaching onto Palestinian territory.

Robert O’Brien, the Trump administration’s national security adviser, was defending Mr Trump’s Middle East peace plan that was unveiled earlier this month during a meeting with other diplomats on Wednesday.

Mr O’Brien said Mr Trump’s plan, while not perfect, was a good deal for the Palestinians and urged them to give their support.

“This could be the last opportunity for a two-state solution,” Mr O’Brien said. “The Israeli birth rate is strong and is growing because sadly anti-Semitism in Europe and other places around the world is encouraging more Jews to return to Israel. The settlements are going to continue to expand. If this freeze on settlements doesn’t hold. If this peace process doesn’t work, it may be physically impossible to have a two-state solution.”

The Israeli settlements built in the West Bank have been largely condemned by the international community – and by Palestinians – as illegal. Mr O’Brien’s statements seem to paint the expansion of Israeli expansion into Palestinian territory as inevitable, which is in line with Mr Trump’s overwhelming support of Israel in matters of diplomacy.

In 2017, Mr Trump recognised Jerusalem as the capital of Israel – a move that put him at odds with the majority of world leaders – and opened an embassy in the city the following year.

The language of ultimatum given by Mr O’Brien – “this could be the last opportunity” – echoes that of the architect of Mr Trump’s Middle East peace plan, his son-in-law Jared Kushner.

In an interview with CNN’s Christiane Amanpour, Mr Kushner suggested if the Palestinians didn’t accept the offer they would be “screwing up” and would lose the sympathy of the global community.

“The Palestinian leadership have to ask themselves a question: Do they want to have a state? Do they want to have a better life? If they do, we have created a framework for them to have it, and we’re going to treat them in a very respectful manner,” Mr Kushner told Ms Amanpour. “If they don’t, then they’re going to screw up another opportunity like they’ve screwed up every other opportunity that they’ve ever had in their existence.”

Mr Kushner defended the plan by citing his own “expertise” on the region, claiming he’d read 25 books and had been studying the 72-year-old conflict for three years.

Mr Trump’s plan includes the eventual creation of a Palestinian state, but does so by forcing Palestinians to give up the West Bank land already occupied by Israeli settlers and to cede the agriculturally significant Jordan Valley – home to 65,000 Palestinians – to Israel.

Palestinian leaders have been quick to voice their opposition to the plan, which Mr Trump touted as the “Deal of the Century.”

“After the nonsense that we heard today we say a thousand ‘no’s’ to the Deal of the The Century,” Palestinian president Mahmoud Abbas said.

Despite US insistence that Israeli Prime Minister Benjamin Netanyahu proceed with plans for annexation slowly, Mr Netanyahu said he would vote on the issue at his next Cabinet meeting.