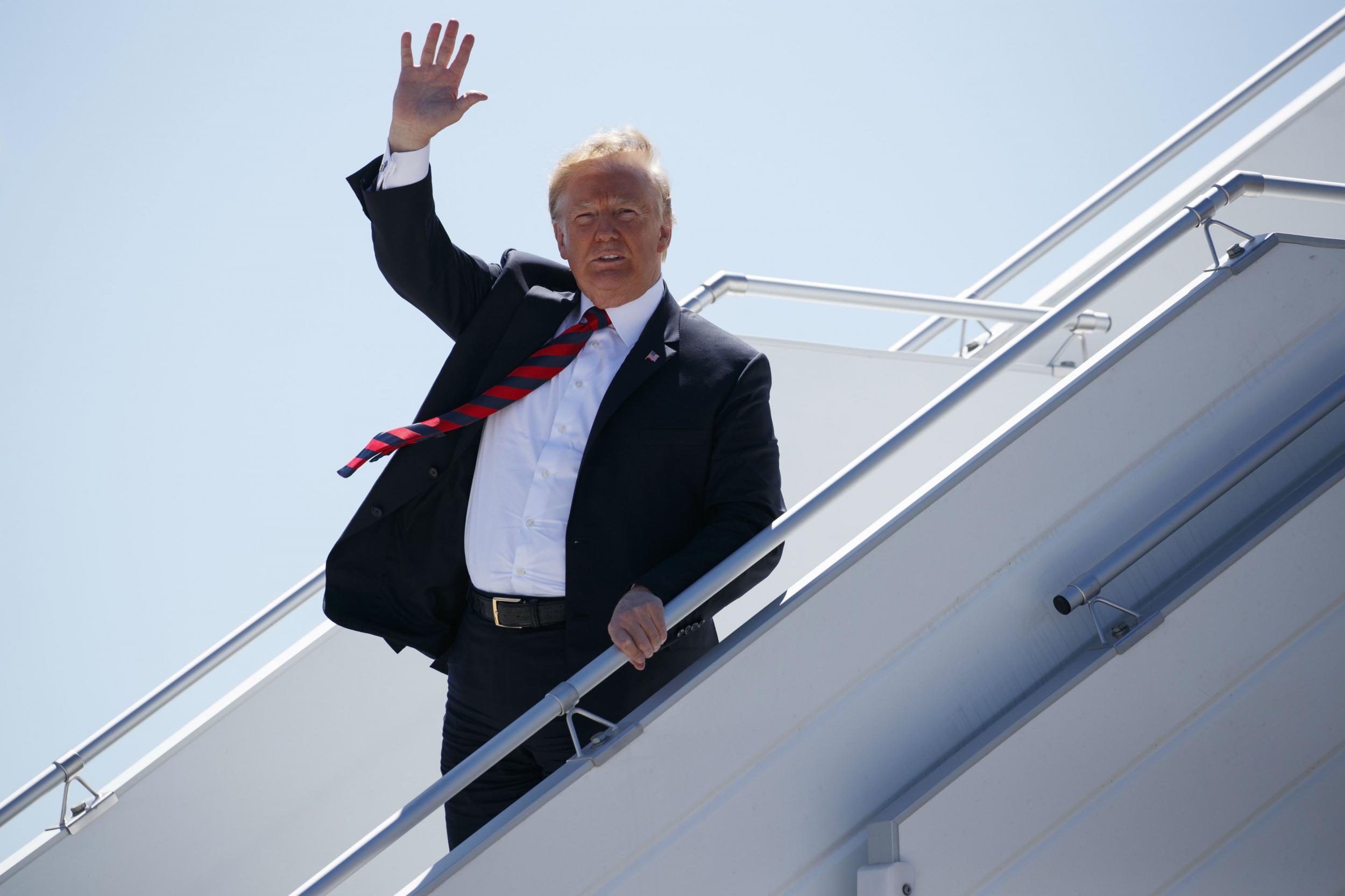 Donald Trump has touched down in Canada for crucial G7 talks – arriving in a storm of his own making after suggesting Russia should be readmitted to the elite group of wealthy nations.

Against a backdrop of already heightened tension over the US’s imposition of tariffs on imports of steel and aluminium – something the EU, Canada, and Mexico lobbied to be exempted from – the US president further stirred anxiety with comments over Moscow.

Even before leaving Washington, Mr Trump told reporters he believed that Russia, expelled from the group after its 2014 annexation of Crimea, ought to readmitted.


“Why are we having a meeting without Russia in the meeting?” he said. “They should let Russia come back in because we should have Russia at the negotiating table.”

Mr Trump’s suggestion received cool reactions from other members of the world’s top economies. While Italian prime minister Giuseppe Conte said he supported Russia’s readmission to the group, Canada, France and Britain said they were opposed to Russia’s re-entry.

Theresa May, the UK prime minister, told the BBC: “I have always said we should engage with Russia but my phrase is ‘engage but beware’. We should remind ourselves why the G8 became the G7, it was because Russia illegally annexed Crimea.”

She added: “We have seen malign activity from Russia in a whole variety of ways, of course including on the streets of Salisbury in the UK. So we need to say, I think, before any such conversations can take place Russia needs to change its approach.”

France also made clear it was opposed to the idea. Reuters quoted a French presidential source as saying Mr Trump’s opinion did not seem “coherent” in view of the latest sanctions imposed by the US on Moscow.

“As a reminder, the latest country to have imposed individual economic sanctions is the United States, so this proposal doesn’t seem coherent,” the Elysee source added.

Even Russia seemed unimpressed by Mr Trump’s proposal. “Russia is focused on other formats, apart from the G7,” Kremlin spokesman Dmitry Peskov said in a statement reported by the government-controlled Sputnik news agency.

By itself, Mr Trump’s bluster and disdain for diplomatic protocol is nothing new. With an eye to his own supporters rather than international capitals, the US president has spent the last few days preparing for his meeting with leaders that are supposed to be allies, by sniping at them on social media.

On Thursday, French President Emmanuel Macron and Canadian Prime Minister Justin Trudeau signalled they would use the G7 event to take a stance against new US tariffs on steel and aluminium imports. At a joint press conference on Thursday, Mr Macron said: “A trade war doesn’t spare anyone. It will start first of all to hurt US workers.”

Mr Trudeau, the host of the summit, said Mr Trump’s actions would hurt both American and Canadians, adding he hoped to get Mr Trump to realise it was “counterproductive”.

The US president, making clear he was once again cared little about upsetting those nations that the US has traditionally sought to work, responded by posting a message Twitter that said: “Please tell Prime Minister Trudeau and President Macron that they are charging the US massive tariffs and create non-monetary barriers. The EU trade surplus with the US is $151bn and Canada keeps our farmers and others out. Look forward to seeing them tomorrow.“

Later on Thursday, Mr Trump said: “Prime Minister Trudeau is being so indignant, bringing up the relationship that the US and Canada had over the many years and all sorts of other things…but he doesn’t bring up the fact that they charge us up to 300 per cent on dairy – hurting our farmers, killing our agriculture!”

He added: “Take down your tariffs & barriers or we will more than match you!”

In April, when Mr Trump hosted Mr Macron for a state visit to Washington – the former reality television star’s first as president – there was much talk of the 40-year-old Frenchman’s ability understand and negotiate with the older man. Some even called him the “Trump whisperer”.

But Mr Macron’s main priority in his visit to the US was to persuade Mr Trump to keep the US in the Iran nuclear deal, something he ultimately failed to do.

Mr Macron’s priority for the meeting at La Malabie in Quebec is to present a united Europe front on issues ranging from tariffs, World Trade Organisation reforms, the Paris climate agreement and agreements on Iran and Libya.

But having departed Washington late because of his decision to speak with reporters, the status of a series of group and one-on-one meetings Mr Trump was due to participate in appeared unclear. The White House said a meeting with Mr Macron was off for now but officials were working to reschedule it. The French president’s office said the meeting would be held later on Friday afternoon.

And because of Mr Trump’s need to leave for Singapore mid-morning on Saturday, he will not take part in sessions on climate change and the environment. Associated Press (AP) quoted the White House as saying an aide will take his place.

AP said under Mr Trump, the US has abandoned its traditional role in the G7. His predecessors pressed for freer global trade and championed a trading system that required countries to follow World Trade Organisation rules. By contrast, Mr Trump’s policies have been more protectionist and confrontational.

“The rules-based international order is being challenged, not by the usual suspects, but by its main architect and guarantor: the United States,” said European Council President Donald Tusk said.

Sebastian Mallaby, a senior fellow with the Council on Foreign Relations, described the relationships between the US and the rest of the G7 as at a “new level of crisis”, saying that it was not just about trade but “a general US attitude towards the system”.

Despite the conflict, Mr Mallaby predicted the countries would still seek to work with the US, calling it “the indispensable country”.