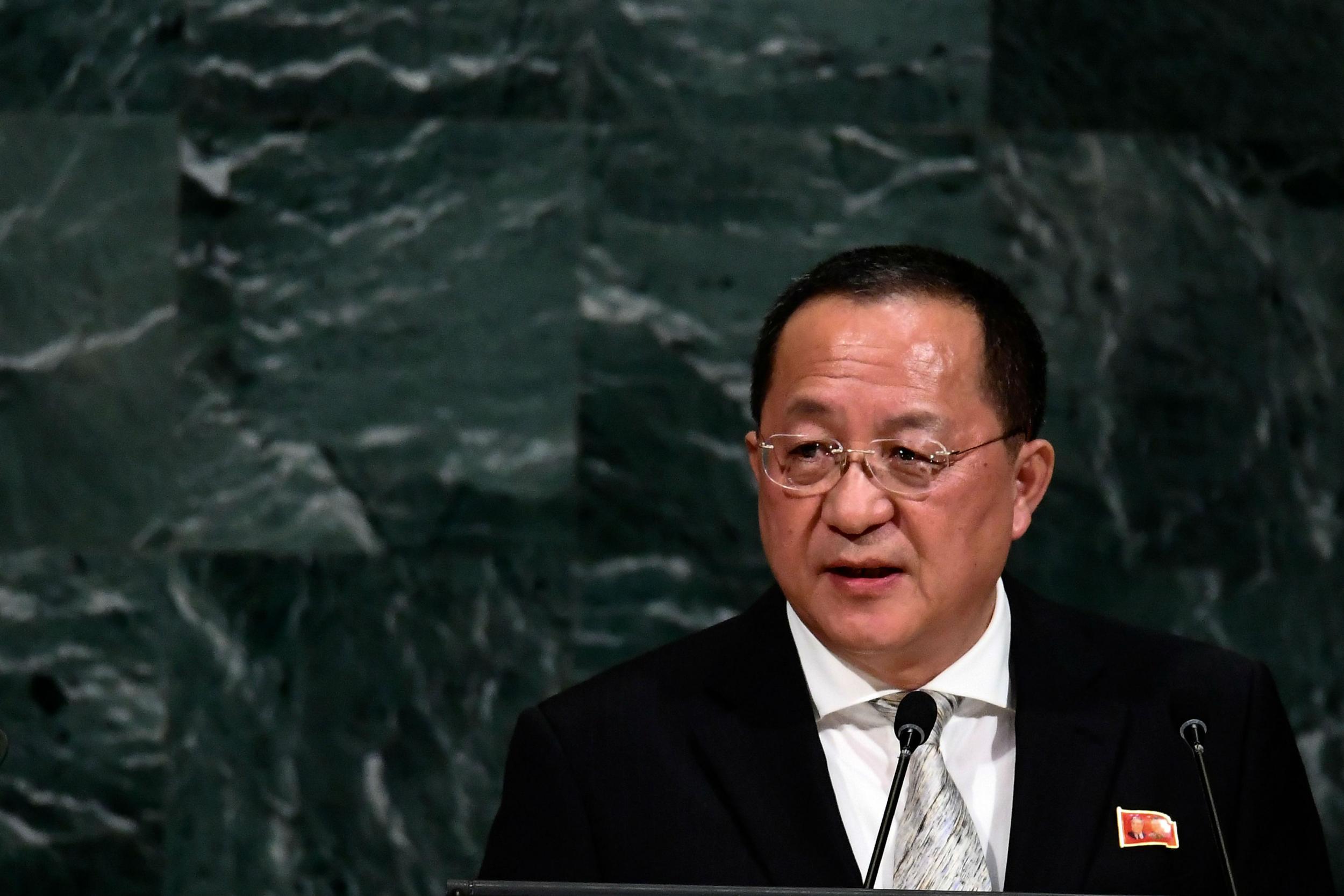 North Korea has said it cannot unilaterally give up its nuclear weapons and attacked the US for failing do more to build a relationship of trust.

But he claimed there had not been a similar move by the US. “We do not see any corresponding response from the US,” he said, according to Reuters. “Without any trust in the US there will be no confidence in our national security and under such circumstances there is no way we will unilaterally disarm ourselves first.”

The complaints from Mr Ri about the US’s reluctance to a phased approach to denuclearisation, have been made before. But the fact he did not flat out reject unilateral denuclearisation as North Korea has in the past, may have been of significance.

Mr Ri referred to a joint statement issued by Kim Jong Un and Donald Trump at a first ever summit between a serving US president and a North Korean leader in Singapore on June 12, where Mr Kim pledged to work towards “denuclearisation of the Korean peninsula” while the Trump administration issued guarantees of security to North Korea.

North Korea has been seeking a formal end to the 1950-53 Korea War, but the United States has said Pyongyang must give up its nuclear weapons first. Washington has also resisted calls to relax tough international sanctions on North Korea, the news agency said.

“The US insists on the ‘denuclearisation-first and increases the level of pressure by sanctions to achieve their purpose in a coercive manner, and even objecting to the ‘declaration of the end of war’,” said Mr Ri.

“The perception that sanctions can bring us on our knees is a pipe dream of the people who are ignorant about us. But the problem is that the continued sanctions are deepening our mistrust.”

Mr Ri made no mention of plans for a second summit between Mr Kim and Mr Trump that the US leader highlighted at the United Nations earlier in the week.

This year at the United Nations, Mr Trump, who last year threatened to “totally destroy” North Korea, was noticeable for the amount of praise he heaped on Mr Kim for his courage in taking steps to disarm. He said much work still had to be done to reach disarmament. “If it takes two years, three years or five months – doesn’t matter,” he said.

Mr Ri said that Mr Kim had a “firm determination to turn the Korean peninsula into a land of peace free of both nuclear weapons and nuclear threats”.

The Associated Press said Russia’s foreign minister, Sergey Lavrov, called on the Security Council to pass a resolution commending the progress made and suggested that “modest steps” be taken to ease sanctions to encourage Mr Kim. The US has blamed Russia for skirting the sanctions and called for full implementation until full and verifiable denuclearisation has taken place.

Secretary of State Mike Pompeo is planning to visit Pyongyang next month to prepare for a second Kim-Trump summit. Both leaders are keen to meet, but there is scepticism among observers that North Korea is ready to give up the weapon it believes have been central to its survival.