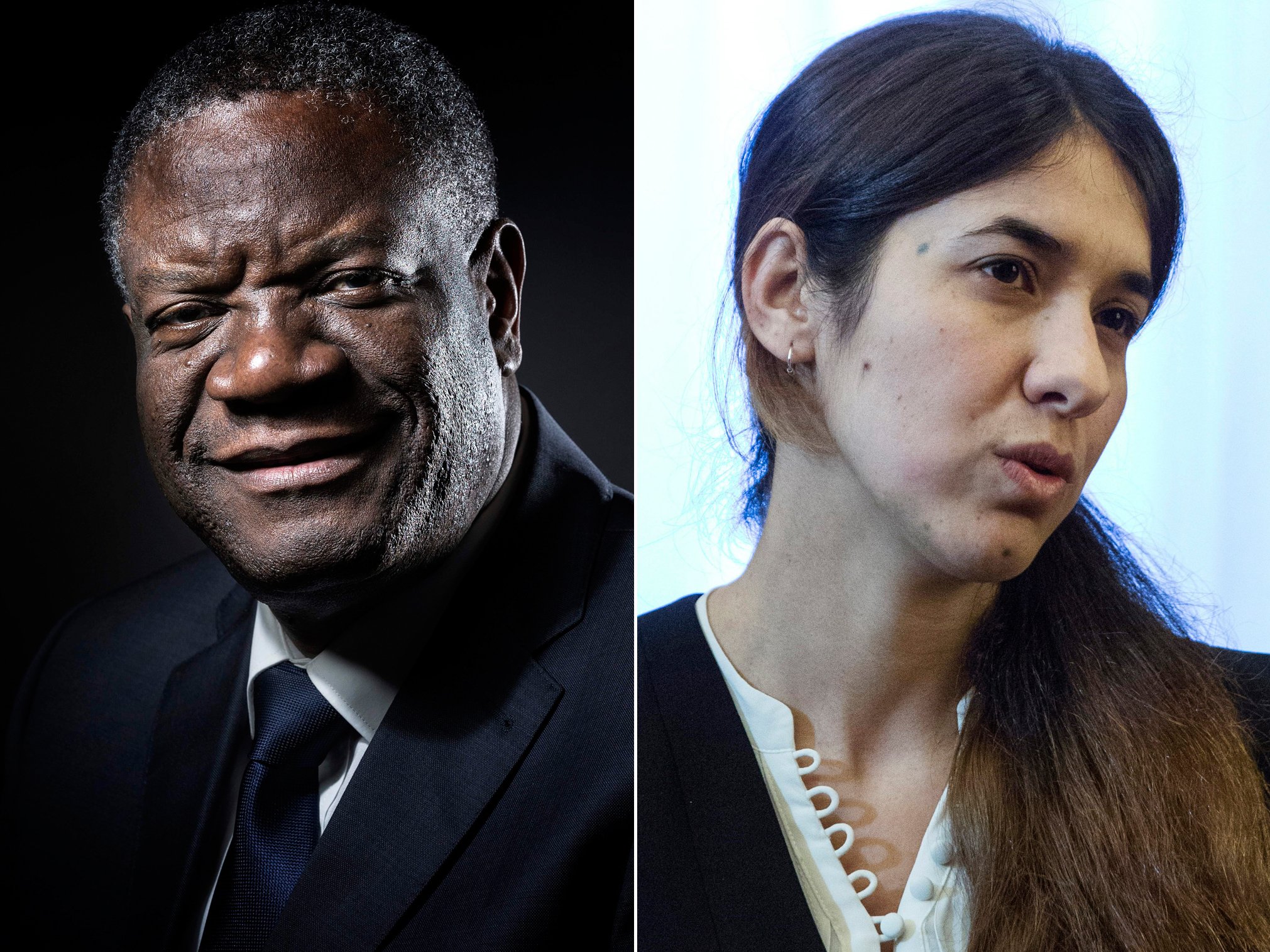 The pair were awarded the honour “for their efforts to end the use of sexual violence as a weapon of war and armed conflict”.

Dr Mukwege, a 63-year-old gynaecologist, has treated thousands of victims of sexual assault in the Democratic Republic of Congo despite threats to his own life.

He has been repeatedly nominated for the Nobel and has won several other awards including the UN Human Rights prize in 2008.

Ms Murad, 25, became a victim of war crimes herself when she was kidnapped by Islamic State fighters in northern Iraq in 2014.

Two years later she became the first UN goodwill ambassador for survivors of human trafficking. Her fight to bring Islamic State to account for the rape and abuse of an estimated 3,000 Yazidi girls and women is supported by international human rights lawyer Amal Clooney.

“Denis Mukwege is the helper who has devoted his life to defending these victims,” the Norwegian Nobel Committee said in its announcement.

“Nadia Murad is the witness who tells of the abuses perpetrated against herself and others.

“Each of them in their own way has helped to give greater visibility to wartime sexual violence, so that the perpetrators can be held accountable for their actions.”

The Nobel Committee said they were unable to contact either winner to tell them about the award before making the announcement.

Dr Mukwege later revealed he was performing surgery when he first heard the news. “I can see in the faces of many women how they are happy to be recognised,” he said.

“This violence committed on their bodies happens not only in our country, the Democratic Republic of Congo, but also in many other countries.

“Dear survivors all over the world, I would like to tell you that through this prize, the world is listening to you and rejects indifference, the world refuses to stand idly by in the face of your suffering.”

In her own statement, Ms Murad said she shared the award with “all survivors of sexual violence around the world”.

“As a survivor, I am grateful for this opportunity to draw international attention to the plight of the Yazidi people who have suffered unimaginable crimes since the genocide by Daesh, which began in 2014,” she added.

“Many Yazidis will look upon this prize and think of family members who have been lost, are still unaccounted for, or remain in captivity.

“For myself, I think of my mother, who was murdered by Daesh. I think of the children with whom I grew up, and what we must do to protect them.

“Persecution of minorities must end. Sexual violence against women must never be tolerated. Survivors deserve justice. And a safe and secure pathway home.

“We must not only imagine a better future for women, children and persecuted minorities, we must work consistently to make it happen – prioritising humanity, not war.”

She also congratulated Dr Mukwege, describing him as “a man I admire greatly”.

Malala Yousafzai, who became the youngest Nobel laureate at 17 in 2014, tweeted her congratulations to both winners, adding: “Their work saves lives and helps women speak out about sexual violence.”

The Iraqi government sent its “deepest respect” to Nadia Murad and said it was committed “to supporting victims of sexual violence perpetrated by Daesh in Iraq and to delivering meaningful justice to survivors”.

Donald Trump had been one of the favourites to win the prize following his summit with North Korean leader Kim Jong-un.

Among the 216 individuals and 115 organisations put forward this year were the Syrian civilian aid group the White Helmets, The American Civil Liberties Union (ACLU), which has challenged many of Mr Trump’s policies, Russia’s Novaya Gazeta newspaper, the UN High Commissioner for Refugees, and Raif Badawi, the Saudi Arabian blogger who is imprisoned for allegedly “insulting Islam”.

Bookmakers also took bets on Jeremy Corbyn and Theresa May at 100-1.

Earlier this year Mr Trump said “everyone thinks” he deserves a Nobel Peace Prize. His nomination was also supported by the South Korean president, Republican members of Congress, former Ukip leader Nigel Farage and a group of anti-immigration Norwegian politicians.

Last year the prize was won by the International Campaign to Abolish Nuclear Weapons (ICAN). The Geneva-based group said in a statement that Dr Mukwege and Ms Murad “thoroughly deserve this honour”.

“The Nobel Committee has rightly chosen to highlight the role of women this year in giving the award to Nadia and Denis, and it is great to see women like Nadia leading on this issue just as they do in the disarmament movement,” added ICAN.

Oyvind Sternersen, a Nobel historian, said: “This is a Nobel bullseye – recognising victims of war has a long history in the peace prize.”