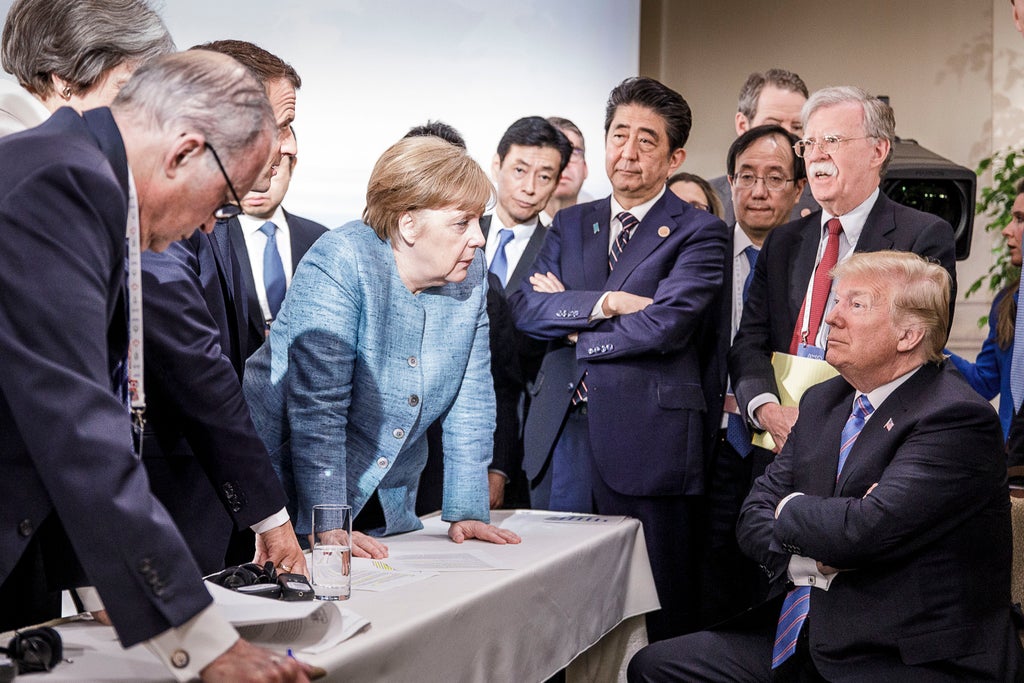 Former president Barack Obama slightly squinted and bit his lip in characteristic fashion as he said: “Now she is all alone,” to his adviser. He had spent three hours alone with Angela Merkel in Hotel Adelon in Berlin. It was late November 2016. Donald Trump had just been elected the 45th president of the US and Obama was worried as he prepared to leave office. Only one individual, he thought, could keep the liberal world order alive while America was taking leave of its geopolitical senses. And that person was the German chancellor.

But Merkel had decided not to seek another term after the German federal elections in September 2017. Obama was in the German capital to make her change her mind. He succeeded. Merkel was persuaded that it was her duty to carry on the baton of liberal internationalism, free trade and democracy. At least for the next four years.

“I noticed a tear in her eye as we left,” Obama’s speechwriter Ben Rhodes later noted when he recounted the rendezvous between the two leaders. At least, that is the story as told in a fly-on-the-wall account by the editor of newspaper Die Welt. In the next four years, it was Merkel who sought to salvage the Paris climate accord and it was she who maintained the geopolitical pressure on Vladimir Putin when Trump did the opposite.

If anything is Merkel’s legacy, it is her custodianship of the liberal world order. Angela Dorothea Merkel (nee Kastler) is, above all, a pragmatic foreign politician. Whereas her immediate predecessors – her mentor, the Christian democrat Helmut Kohl (1982-98) and the social democrat Gerhard Schroeder (1998-2005) are primarily remembered for domestic policies, Merkel was a foreign-policy politician. Kohl presided over German unification and Schroeder reformed the welfare state. Merkel’s legacy, now that she really is standing down, has been international.

Merkel used state intervention on a massive scale to rescue the world economy after the 2008 financial crash. She embraced anti-austerity policies to save the euro. She was always pragmatic. As she told me in 2008: “I want as much market economics as possible, with as much state intervention as necessary.” When reminded that this was reminiscent of socialist politics from the 1960s, she just smiled and shrugged, “Yes, and, so what if it works?”

That things just must work – or funktioneren – is her mantra in most things. If any politician was wedded to the idea of evidence-based policymaking, it is her. As a scientist with a doctorate in quantum physics, she is unique in a country where most politicians are lawyers or economists.

When she had to choose a cabinet minister for the Kanzleramt – her executive office – she opted for Helge Braun, a medical doctor. This was because she knew he would focus on facts. It turned out to be an inspired choice. Braun had a special interest in infectious diseases and his work, alongside a well-functioning public health system, meant that Germany was ahead of many other countries when Covid-19 hit the world in early 2020.

Because of her preference for facts and evidence, Merkel has been called the “master of procrastination” – Die Zauderkünstlerin. Whereas most other world leaders are “men of action” who go off like proverbial firecrackers when crises emerge, Merkel prefers to do her homework and then, at the last minute, make a decision based on facts. The Germans even invented a word for it, Merkeln (to merkel), meaning to mull over a decision before action is taken.

We didn’t need another hero

People often search for exceptional individuals. It is a popular view that history is shaped by exceptional men and women. Certainly there is a place for this “great man theory of history” as it was called in the gendered language of the Victorian age. If we are tempted by this trope, we should note that but for Merkel, the fate of the world economy, the euro and the more than one million refugees that were allowed into Germany during the height of the migrant crisis would have been very different. And yet, she was not a successful politician because she was uniquely wise or prescient. She got results because she was willing to collaborate and find common ground.

At a time when so many strong men are seeking dictatorial powers around the world, it provides food for thought that the most successful democratic politician of the past few decades – and perhaps even the modern era – is a woman who believed in consensus. Merkel shows that politics should be focused on solving problems rather than on winning the arguments.

“Who do you ring when you want to call Europe?” asked Henry Kissinger, the former US secretary of state. The answer for the past 16 years has been Angela Merkel. She will be missed. There are no politicians who can fill her shoes but her successor – whomever he or she turns out to be – will still be the person to call. Germany, due to its size, speaks for Europe. That Obama wanted Merkel to stay on during what he foresaw would be a chaotic period under Trump was not only due to her formidable skills – it was also a sign that Germany is the European power.

The brute fact is that international politics is determined by institutions and established rules more than it is governed by individuals. Merkel’s legacy is not so much what she did but how she defended this rule-based international order.

Matt Qvortrup is the chair of applied political science at Coventry University. This article first appeared on The Conversation.