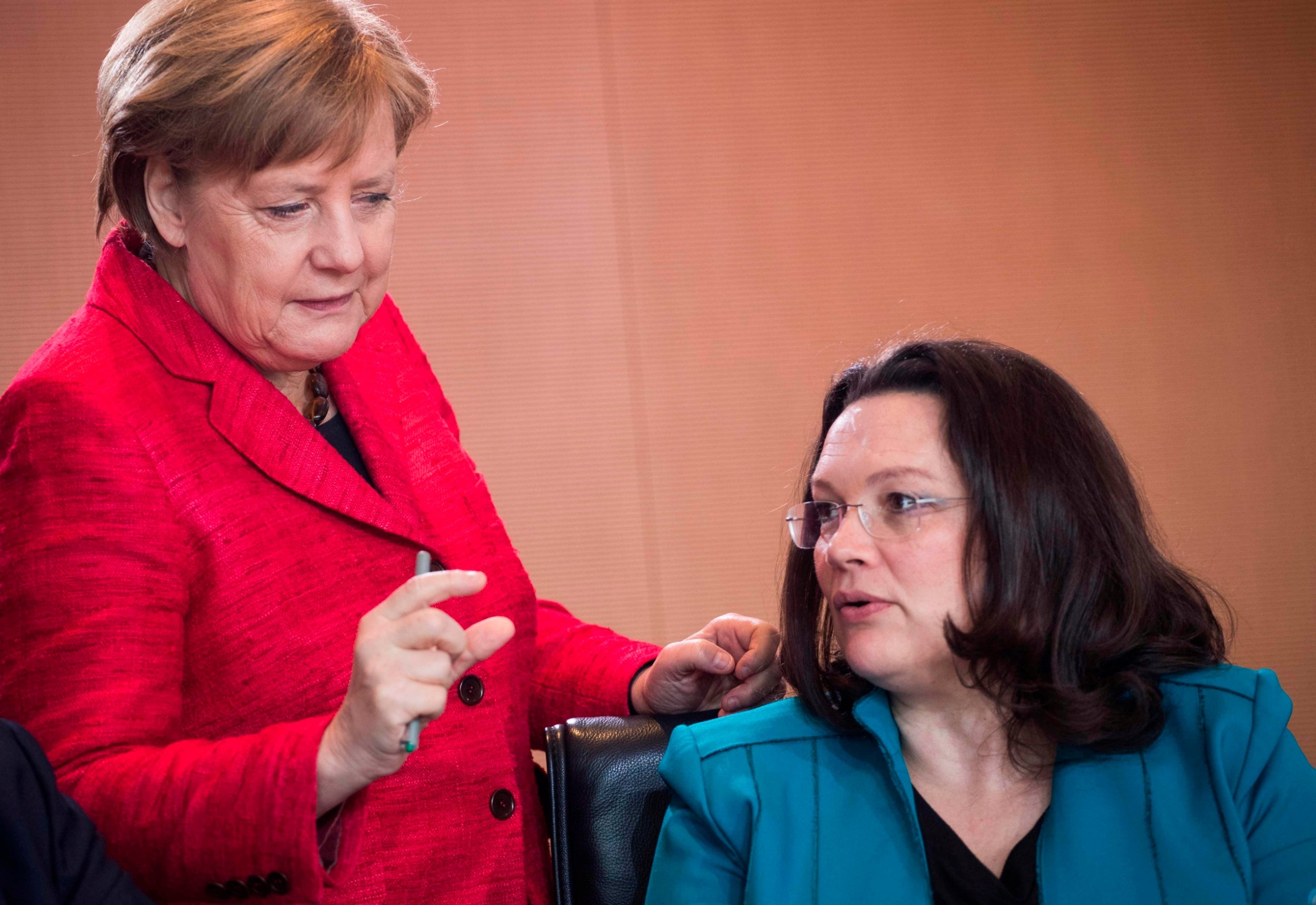 Angela Merkel‘s government is facing another crisis and possible collapse after the leader of her main coalition partner resigned.

Andrea Nahles quit as chief of the centre-left social democrats (SPD) after a series of terrible election results which saw her party eclipsed by the Greens.

“The discussions within the parliamentary faction and feedback from within the party have shown me that I no longer have the necessary support to carry out my duties,” the outgoing leader said.

Ms Merkel’s conservative CDU group is in coalition with the SPD in a so-called “grand coalition” or “GroKo” – an agreement between the two largest parties to form a government together.

Ms Nahles’ departure potentially opens the door for an anti-coalition party leader – with anyone standing as a replacement likely to come under pressure from the party’s grassroots to quit government.

The SPD has been consistently sliding in the polls since it joined the GroKo in 2013, with the party renewing the pact in 2017 despite losses at federal elections, including to the far-right AfD.

In March last year 66 per cent of the SPD leadership voted in favour of a grand coalition, but since then the party has continued to be punished at the ballot box for its participation in the pact.

Crucially, the party has started shedding votes to the Greens, who beat it into third place in the European Elections and are now polling first place above all the other parties in some surveys.

The SPD won an all-time low of just 16 per cent last week, with polls released over this weekend showing them course to get just 12 per cent, its worst ever showing in a survey.

Prominent dissenting voices within the social democrats such as Kevin Kühnert, leader of the SPD’s youth wing, have called for the party to ditch the establishment alliance and renew itself outside of government.

If the SPD does pull out of the government, Ms Merkel could try to secure the support of the Greens and liberal FDP – though previous attempts to form a government with those parties failed in 2017, leading to the present arrangement.

The Greens’ surge in the polls also make it unlikely that they would want to avoid new elections, given the potential gains they could make at the ballot box.

The CDU could also try to govern as a minority to avoid new elections. Ms Merkel has said she would not stand at the next German federal elections, and that she would instead hand over the reins to a new chancellor. She has also quit her party leadership, which is now occupied by her protege, Annegret Kramp-Karrenbauer – widely referred to as AKK.

“I assume the SPD will undergo a succession in short order without hindrance to the functioning of the grand coalition,” Ms Kramp-Karrenbauer.

“In the CDU we believe that this is not the time to play politics. We want to serve our country with good governing policies.”