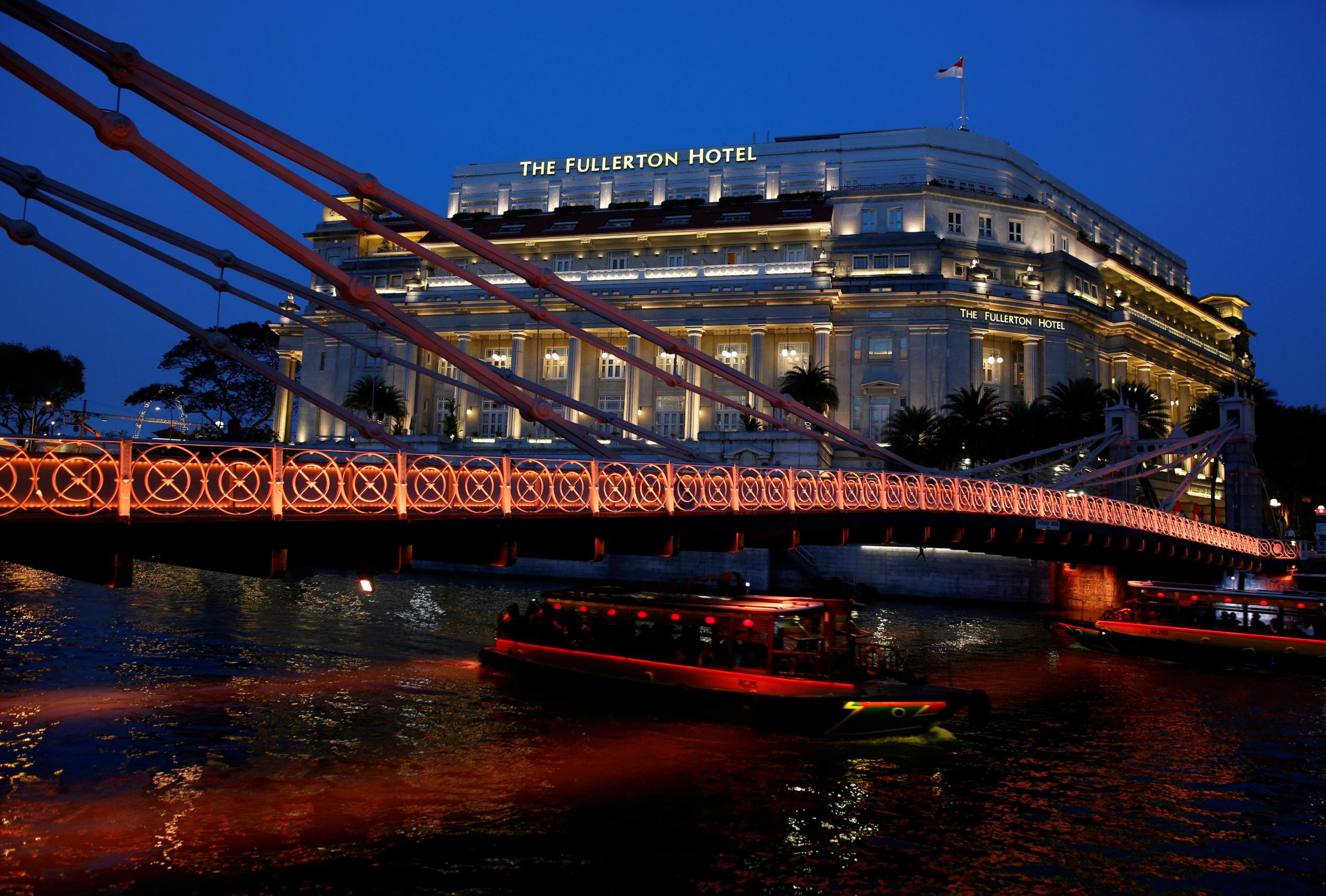 The US is reportedly trying to find a way to pay for a luxury presidential suite for Kim Jong-un – something the North Korean leader apparently desires to use during his stay in Singapore but may not be able to pay for.

A day after Donald Trump revealed his proposed meeting with Mr Kim was back on the calendar for 12 June after a positive meeting at the White House with a senior North Korean official, it emerged that mundane matters could be getting in the way of an historic geopolitical achievement.

As White House deputy chief of staff Joe Hagin and Mr Kim’s de facto chief of staff, Kim Chang Son, seek to hammer out logistical details in Singapore ahead of the meeting barely 10 days away, it was reported the North Korean leader has asked to stay at the five-star Fullerton Hotel. Yet, according to the Washington Post, the cash-strapped country has demanded someone other than North Korea pay the hotel bill, which would include a $6,000 (£4,500) per night fee for the presidential suite.


The hotel, located on the Singapore River, describes itself as the “most exclusive” in the city state. It says the presidential suite was “formerly the card room of the elite Singapore Club, [and is] furnished with a baby grand piano and has a private elevator for discreet access”.

Asked about reports that Mr Kim may soon be a guest, a receptionist at the hotel, which was built in 1928, told The Independent: “Guest information is strictly confidential.”

The Post reported while the US may be open to meeting the costs of Mr Kim’s stay at the neo-classical hotel, it was mindful of not wanting to insult him. It also said any payment may contravene Treasury Department sanctions. As a result, the Office of Foreign Assets Control would need to temporarily suspend the applicability of sanctions through a waiver. The White House did not immediately respond to enquiries.

Yet there may be other solutions. On Saturday, Singapore said it was prepared to meet some of the costs of the summit. Without giving specifics, defence minister Ng Eng Hen told reporters the nation was ready to meet some of the expenses in order to ensure the meeting was a success.

“Obviously yes, but it is a cost that we’re willing to bear to play a small part in this historic meeting,” Mr Ng said.

Meanwhile, the International Campaign to Abolish Nuclear Weapons (ICAN), the Geneva-based campaign group that pushes for full implementation of the Treaty on the Prohibition of Nuclear Weapons and which won the 2017 Nobel Peace Prize for its work, said it would meet the costs of Mr Kim’s hotel stay.

“Our movement is committed to the abolition of nuclear weapons and we recognise that this historic summit is a once in a generation opportunity to work for peace and nuclear disarmament,” Akira Kawasaki, of ICAN’s steering group, said in a statement.

“The Nobel Peace Prize included a cash prize and we are offering funds from the prize to cover the costs for the summit, in order to support peace in the Korean Peninsula and a nuclear-weapon-free world.”

Despite widespread speculation, there has not yet been any public confirmation of the location for the meeting between Mr Kim and Mr Trump.

The potential venues mentioned as the site of the summit include the Shangri-la Hotel, which hosted India’s prime minister and defence chiefs from around the world this weekend, the Capella hotel on the resort island of Sentosa, and the Marina Bay Sands.

The last of these is a three-tower, 2,561-room property, which opened in 2011, and is owned by the Las Vegas Sands Corporation, whose billionaire chairman, Sheldon Adelson, was one of the biggest financial backers of Mr Trump’s 2016 presidential bid.

The Post pointed out that if someone else picked up the bill of Mr Kim, whose dramatic diplomatic rapprochement with the West has stunned observers, it would not be the first time.

During the 2018 Olympics in PyeongChang, South Korea spend $2.6m (£1.95m) to cover the travel costs and accommodation of the North Korean cheering squad, an art troupe and other members of the delegation. Meanwhile, at the same games, the International Olympic Committee paid for 22 North Korean athletes to travel to the event.