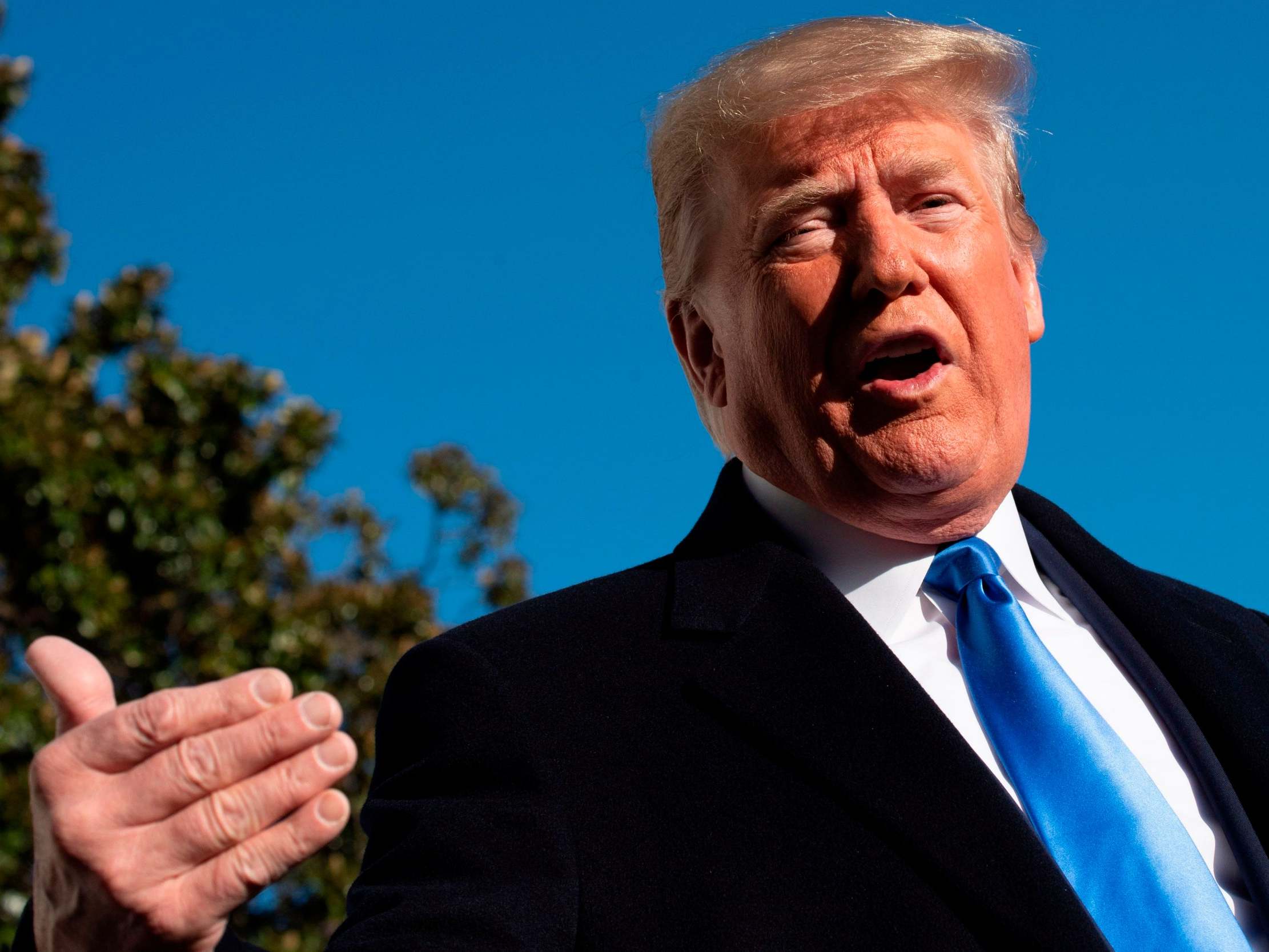 The US has spent two years chipping away at the World Trade Organisation (WTO), criticising it as unfair, starving it of personnel and disregarding its authority, as Donald Trump seeks to upend the global trade system.

This week, the Trump administration is expected to go one step further and effectively destroy the organisation’s system for enforcing its rules — even as Mr Trump’s widening trade war has thrown global commerce into disarray and another tariff increase on Chinese goods set for next weekend could send markets reeling.

Over the past two years, Washington has blocked the WTO from appointing new members to a crucial panel that hears appeals in trade disputes. Only three members are left on the seven-member body, the minimum needed to hear a case, and two members’ terms expire Tuesday. With the administration blocking any new replacements, there will be no official resolution for many international trade disputes.

The loss of the world’s primary trade referee could turn the typically deliberate process of resolving international disputes into a free-for-all, paving the way for an outbreak of tit-for-tat tariff wars.

It could also signal the end of the 24-year-old World Trade Organisation itself, since the system for settling disputes has long been its most effective part.

“The WTO is facing its deepest crisis since its creation,” Phil Hogan, the European trade commissioner, told members of the European Parliament this year. If the rules governing international trade can no longer be enforced, “we’d have the law of the jungle.”

Mr Trump has already embraced that scenario, wielding America’s economic power to press for better trade terms. He has sidestepped WTO rules by imposing metal tariffs on allies like Canada, Europe and Japan and by adding punishing levies to Chinese goods, prompting appeals to the global body for relief.

The president and his top advisers have long viewed the WTO as an impediment to Mr Trump’s promise to put “America First.” They say the organisation, which insists that all of its members receive equal treatment, has prevented the US from protecting its workers and exerting its influence as the world’s most powerful economy. They have also criticised the WTO for emboldening China — whose economy boomed after it became a member in 2001 — while doing little to curb Beijing’s unfair trade practices.

His advisers point to the WTO’s inability to confront China as a reason for Mr Trump’s trade war with Beijing.

“It’s absolutely critical that the United States has the ability to make its own trade policy,” said Stephen Vaughn, a partner at King & Spalding, who left a high-level post at the Office of the United States Trade Representative in May. “This ability becomes even more important given the challenges that we now face from China.”

The World Trade Organisation was founded by US and European officials more than two decades ago as a way to open global markets, regulate commerce and promote peace and stability. One of its chief responsibilities was to write trade agreements among its members and provide an orderly way to settle disputes.

But the WTO almost immediately fell short when it came to writing trade pacts, as it found it nearly impossible to achieve consensus between disparate members like the US, China, Afghanistan and India.

China’s entry into the organisation — 18 years ago this week, on 11 December, 2001 — put further stress on the system. The addition of China’s more than 1 billion people to the global marketplace created a huge opportunity for companies and a shock for workers in the United States and elsewhere who were forced to compete.

(The WTO’s rules were not written with an economy like China’s in mind, and critics say the organisation has failed to adequately police Beijing for using a mix of private enterprise and state support to dominate global industries.

The Trump administration has criticised the body’s decision to allow China to claim a special status for developing countries given that it is now the world’s second largest economy. And it has condemned the WTO for doing little to stop China from subsidising its products — instead cracking down on US measures that are meant to block those cheap goods at the border.

While the WTO’s ability to facilitate trade negotiations was largely paralysed, its other arm, which settles trade disputes, has been much more active, reviewing dozens of cases a year.

Unlike other international organisations, whose rules have no way of being enforced, the WTO may dole out punishments along with its verdicts. When one country is found to have suffered from another’s trade practices, the WTO may allow the aggrieved country to recoup losses through retaliatory tariffs.

The US has long won the majority of cases it brings to the WTO, though Mr Trump incorrectly argues to the contrary. In October, the WTO gave the US permission to add tariffs on up to $7.5bn (£5.7bn) of European products annually, after deciding that Europe had illegally subsidised its largest plane maker, Airbus.

“We never won with the WTO, or essentially never won,” Mr Trump said 16 October as he met with the Italian president. “And now we’re winning a lot. We’re winning a lot because they know if we’re not treated fairly, we’re leaving.”

But the US has also lost cases and the Trump administration is facing numerous challenges to the president’s aggressive use of tariffs to punish trading partners. Japan, Canada, China, the European Union and other governments are relying on the system to determine whether Mr Trump’s tariffs on steel and aluminium violated global trade rules. However, many of those governments — including the European Union, Mexico and Canada — have not waited for a ruling before imposing retaliatory tariffs on US goods.

Supporters have credited the dispute settlement system with bringing the rule of law to an international trading system that formerly allowed strong countries to dominate weak ones.

But critics say the system exerts too much control, especially at the final stage when the seven-member appellate body makes a binding determination. US officials, including in the Obama administration, have accused the appellate body of judicial activism, saying it is overstepping its authority in creating new rules.

Robert Lighthizer, the US trade representative, has argued that the body’s decisions constrain America’s ability to protect its workers and has insisted it be overhauled. In March, he told lawmakers on the Senate Finance Committee that the WTO had migrated “from a negotiation forum to a litigation forum,” a transformation that had stifled new trade agreements and undermined some countries’ commitment to the organisation.

Over the past two years, Mr Lighthizer has overseen a targeted offensive against the appellate body, in what he says is a push for change. The US has blocked the appointment of new appellate body members, which requires the consensus of all governments.

Officials in other countries share some of America’s concerns, particularly related to China, but they disagree with the Trump administration’s methods. They argue the US and other countries should fix the problems and strengthen the global trading system, not abandon it.

The prospective weakening of global trade rules has worried smaller and poorer nations, who may find themselves at the mercy of the US It has also rankled the European Union, a strong believer in the multilateral system whose economy is heavily dependent on trade.

“They are not perfect, because they were born in a certain context, but they’ve served us well,” Cecilia Malmstrom, the former European Union trade commissioner, said of the global trading rules in an interview in September. “And if they’re not perfect, let’s work to improve them. Let’s not just abolish them.”

Trump administration officials say proposals to overhaul the WTO have fallen short of what is needed. Dennis Shea, the US representative to the WTO, said last week that the US had engaged constructively, but had “have yet to see the same level of engagement” from other countries.

WTO members have been discussing ways to deal with the appellate body’s disappearance, like setting up their own informal appeal process, regardless of the verdict. Many are hopeful that the body can be restored once the Trump administration leaves office, whether that is in 2021 or 2025.

Roberto Azevedo, the WTO director-general, said last week that the suspension of appeals was a serious challenge but that it did “not mean the end of the multilateral trading system.”

But Ujal Singh Bhatia, one of the appellate body members whose term ends Tuesday, said that by making the dispute settlement system potentially non-functional, the United States’ moves had cast doubts on the effectiveness of the organisation overall.

“Why would people come to the WTO to negotiate rules if they are not sure the rules can be enforced?” Mr Bhatia asked.