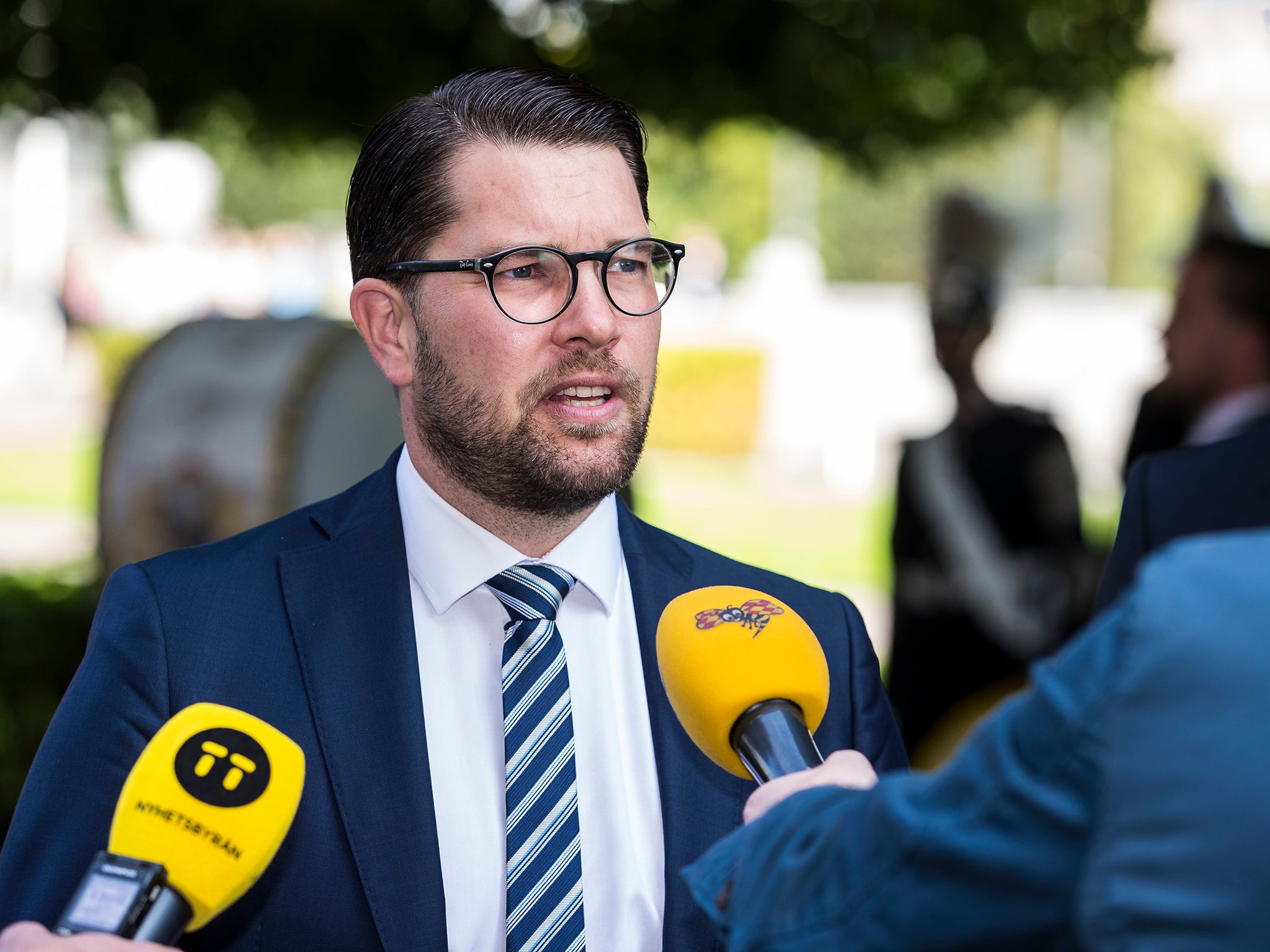 The leader of a party once shunned for its ties to far-right extremism is now riding a wave of popularity that he says may pave the way to a century of political dominance in Sweden.

Jimmie Akesson, the head of the Sweden Democrats, woke up on Friday to news that his party was now polling as the country’s biggest.

At 24 per cent, it is a few percentage points ahead of the ruling Social Democrats that have towered over Sweden’s political landscape for most of the postwar era.

“We want to be part of shaping this country over the next 100 years, just as the Social Democrats have been doing for 100 years,” Mr Akesson said in an interview at the Swedish parliament in Stockholm. “We want political influence, and we want a significant influence.”

The kind of influence Mr Akesson is talking about would mark an historic break with the balance of power in Sweden, where the political establishment once vowed to keep the Sweden Democrats out of any coalition.

The more established groups on the right and left have pointed to the party’s past ties to neo-Nazis and white supremacists in defence of their efforts to isolate the group.

But that stance seems increasingly out of step with what voters in Sweden want.

A separate poll from Sifo also out on Friday put support for the Sweden Democrats at 23 per cent, the highest level ever registered by that pollster. While still trailing the Social Democrats, Sifo said the difference between the two parties was not statistically significant.

As a result of the surge in popularity, some corners of parliament have shown signs of softening to the Sweden Democrats. The conservative-leaning Christian Democrats and the Moderates – Sweden’s biggest opposition party – recently signalled an increased willingness to work with Mr Akesson.

In charge of the party since 2005, Mr Akesson has been weeding out extremists in a process of self-gentrification.

“Voters are seeing us, perhaps not formally, but still, as part of a conservative bloc,” Mr Akesson said. “I think that makes them more willing to give us their votes. That’s the main reason why this is happening now.”

The shift in Sweden’s political landscape follows a punishing election cycle last September. The Social Democrats ultimately emerged as the victors, but only after four months of gruelling coalition talks that resulted in a fragile alliance.

In the meantime, the government has been accused of inaction in handling a growing wave of violence in the country. In late August, a woman was shot dead in Stockholm’s Vallingby suburb, and in the southern city of Malmo another young woman was shot dead while carrying her baby. In the same city, a 15-year-old was shot dead outside a pizza restaurant.

There has also been an increase in the number of bombings, prompting defence experts to compare Sweden with Northern Ireland in the 1980s and even contemporary Afghanistan.

The surge in violence on the streets of some of Sweden’s biggest cities has left voters angry. And the Sweden Democrats have been quick to respond; the party called for a vote of no confidence against the justice minister, which was backed by the Moderate Party.

Though the motion was dismissed, the fact that the Sweden Democrats were able to team up with the largest opposition party for a key vote marked a “milestone”, according to Mr Akesson.

Understanding Sweden’s history with populism also requires taking a look at developments over the past decades, and more recently during the Syrian refugee crisis.

The country’s policy of giving permanent residency to Syrians landing on its shores backfired in 2015, when a spike in immigration became too much for the authorities to handle. The Social Democrat-led government of Stefan Lofven introduced border checks and has since toughened its rhetoric on immigration.

Mr Akesson is enough of a realist to know he is unlikely to achieve a formal alliance with other conservative forces ahead of elections due in 2022. But he says it’s “clear” that the conservative bloc will have to work with them in some form, should they want to form the next government.

“The bar for them to take our support in some form is starting to become rather low,” he said.

Mindful of what happened at the last election in neighbouring Denmark, Mr Akesson says he is no longer concerned about rival forces denting into his party’s support by emulating its policies.

“That is something we have seen with the Moderates and more recently with the Christian Democrats,” he said. “The Social Democrats are sending mixed signals but they have a desire to appear tougher to stop bleeding voters to us. But I think we have been able to fend that off rather well.”