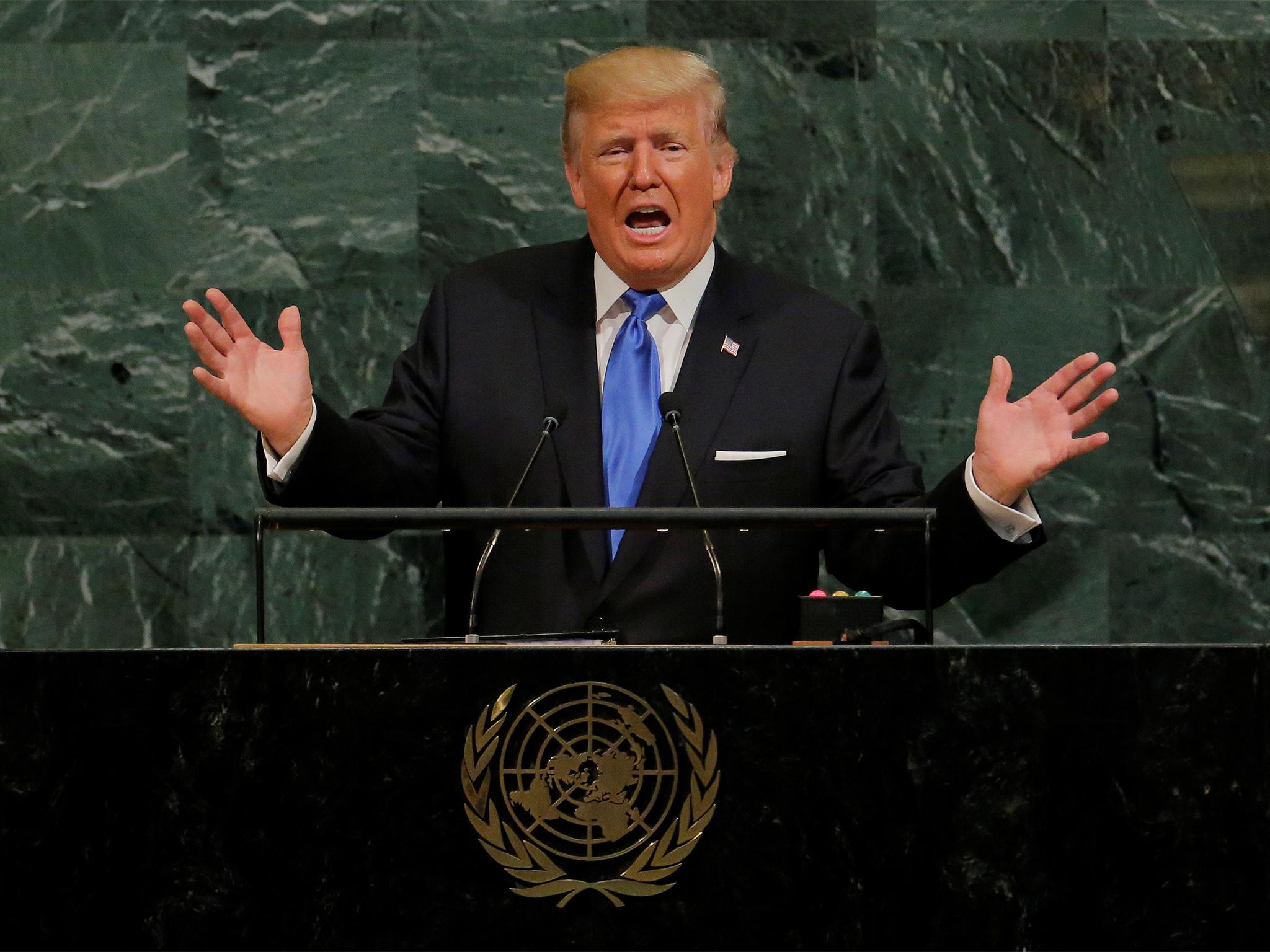 The US president kicked off proceedings by damning with faint praise, stating his faith in the “tremendous potential” of the UN.

“It’s always been surprising more things aren’t resolved because you have all of these countries getting together in one location but it doesn’t seem to get there,” Mr Trump said prior to his arrival.

But how precisely does the forum operate and what great political theatre has it played host to over the years?

What is the General Assembly?

The UN General Assembly is one of the six principle arms of the UN – along with the UN Secretariat, the International Court of Justice, the UN Security Council, the UN Economic and Social Council and the UN Trusteeship Council.

It is the body’s policy-making chamber, in which all 193 member nations have equal representation, meeting between September and January (with a break for Christmas) at the UN’s headquarters in New York to chew over matters of global import.

First convened at Methodist Central Hall in London in the wake of the Second World War on 10 January 1946 as a means of bringing the international community together to avoid a repeat of that catastrophic conflict, the UN subsequently moved to its permanent home in the Big Apple in 1952.

How does it pass resolutions?

Currently chaired by president Maria Fernanda Espinoza of Ecuador, the forum’s responsibilities include overseeing the UN’s budget, appointing non-permanent members to the Security Council, appointing the UN secretary-general and making recommendations regarding international affairs in the form of official resolutions.

These statements declare the collective’s stance on particular affairs of global consequence but are seldom legally-binding, although they do carry political consequences for those member states that fail to adhere to their precepts.

Passing rulings relating to the running of the UN itself requires a two-thirds majority in a members’ vote, each country having one seat and one vote. All other resolutions under discussion can be passed with a simple majority.

The agenda under discussion is planned months in advance before being refined 60 days before the late September session opens.

What memorable moments have their been in the chamber?

The General Assembly has played host to some extraordinary scenes over the decades, few more so than President Trump referring to North Korean leader Kim Jong-un as a “Rocket man on a suicide mission” last year as the threat of reprisals against Pyongyang for its ongoing missile testing in defiance of sanctions reached their zenith.

New Zealand’s prime minister Jacinda Ardern has already made history in 2018 by being the first world leader to bring an infant baby into the room.

Cuban leader Fidel Castro famously gave the longest speech in the forum’s history in 1960, holding the floor for more than four hours and barracking American “imperialism”.

Another piece of fiery anti-American rhetoric came courtesy of Venezuela’s Hugo Chavez, who labelled George W Bush “the devil” at the height of the War on Terror in 2006 and complained of “a smell of sulphur in the hall”.

Mr Bush passing a note ot Condoleeza Rice in 2005 explaining he was going to the bathroom, clearly legible in press photographs, was another comic highlight.

Muammar Gaddafi of Libya gave a memorable address in 2009, tearing a page from the UN charter, pronouncing himself “the king of kings” and calling for the creation of “Isratine”, a one-state solution to the Israel-Palestine conflict.

Not to be outdone, Iranian president Mahmoud Ahmadinejad took to the podium a year later to rail against European support for Israel and to call 9/11 an inside job.

As CNN’s Richard Roth observed, anything can happen at “the Super-Bowl of diplomacy”.