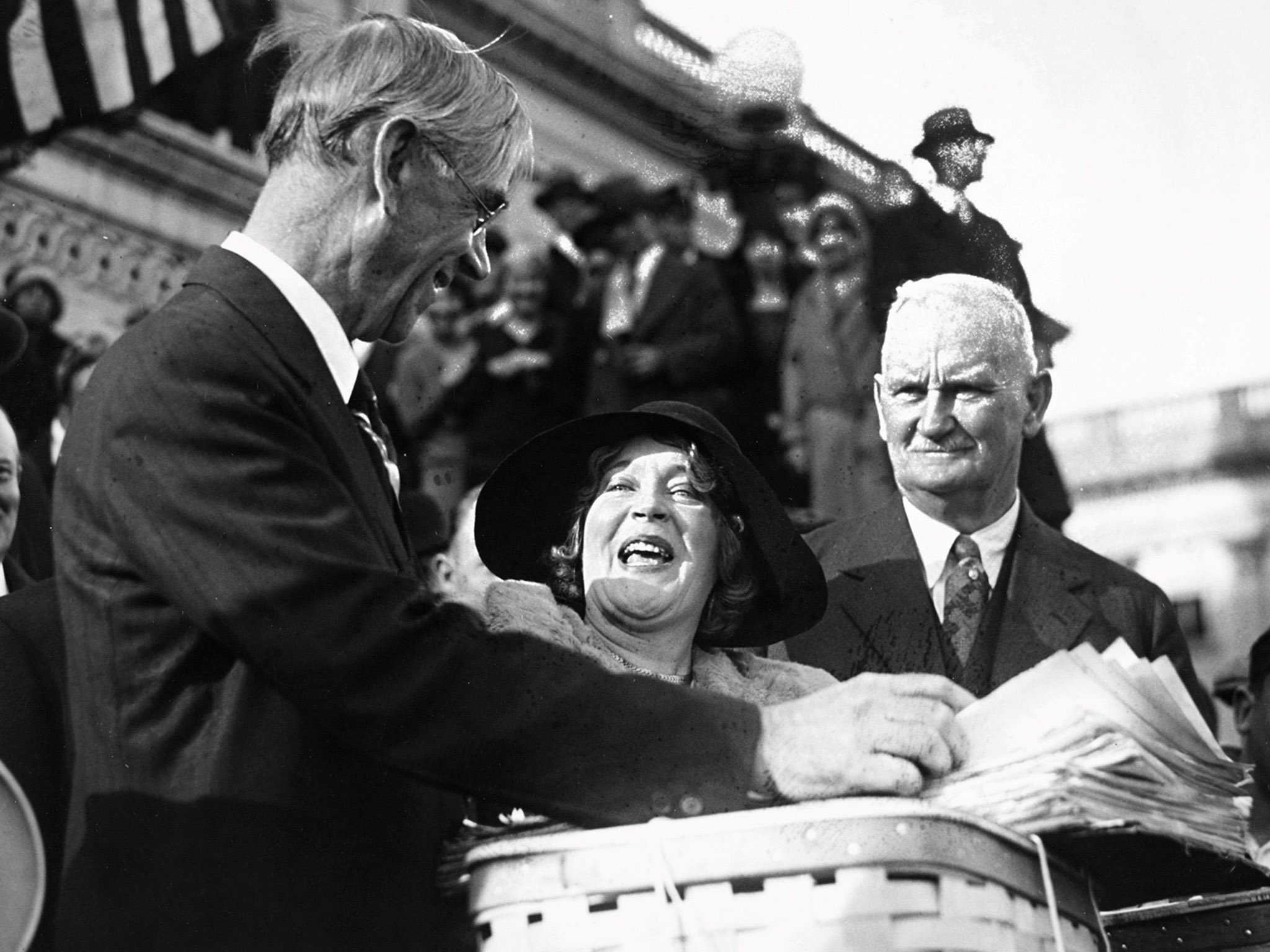 It’s 1929 and two Republican politicians, Reed Smoot of Utah and Willis Hawley of Oregon, are co-sponsoring legislation to keep foreign goods out of the United States. This act of protectionism, the pair promise, will boost domestic employment and protect the living standards of the ordinary American working man.

The Smoot-Hawley Tariff is met with a thunderous wave of condemnation from the economics profession. More than a thousand academics and practitioners petition President Herbert Hoover to veto the legislation.

But to no avail. Hoover, who campaigned on a protectionist ticket, signs the bill into law and import levies on some 20,000 items are jacked up to an average of 40 per cent. America’s great industrial tariff wall goes up – and it will not properly fall again until after the smoke and chaos of the Second World War clears some 15 years later.


Who says history doesn’t repeat itself? Skip forward 88 years and Donald Trump is being sworn in as US president in front of the same Congress building that witnessed the passage of Smoot-Hawley. “Protection will bring great prosperity,” the real estate tycoon and reality TV star declares before the relatively meagre crowd on the National Mall.

Economist jaws, once again, fall in horror. A poll earlier this year shows that virtually everyone in the profession believes tariffs will be damaging rather than beneficial for the US economy. It’s a conviction that spans the political spectrum. Economists who virulently disagree over deficits, tax cuts and regulation find themselves united on this single point about the merits of free trade. But, once again, the academic consensus does no good. The massed ranks of pointy-heads are disregarded. Trump’s bite is matching his bark.

First he went after China, hitting imports of robots and high-speed trains. Then, last week, he crossed a fateful threshold. The Trump administration imposed 25 per cent levies on steel from Europe, Canada and Mexico. And, in what felt like a grave insult to these historic US allies, this was justified on “national security” grounds.

Nor is this the end. Next in Trump’s sites are imports of foreign cars. And after that – who knows? Meanwhile, Europe and Canada, knowing that a man like Trump will mistake patience for weakness, are already hitting back with countervailing tariffs against American goods, from blue jeans to bourbon. Beijing seems to be halting its massive purchases of American soybeans, striking at the agricultural heartland of Trump support. And so the 1930s cycle of retaliation, economic pain, popular anger and evaporating trust seems to emerge from the darkness, like the ghost of trade wars past.

The US will cut an isolated, even reviled, presence at the G7 meeting of the leaders of top economies in Quebec this weekend. Some even question whether the multilateral framework governing global trade can survive a lurch into naked protectionism from the world’s largest economy and the post-war driving force behind liberalisation and openness.

Ever since a British thinker and politician called David Ricardo outlined a revolutionary idea of “comparative advantage” in 1817, using an example of Portuguese wine and English cloth, economists have been convinced of the theoretical merits of free trade.

Ricardo argued that productive efficiency in every nation is maximised when people focus on producing what they are best at producing and exchange the results. The intellectual revolution lay in the word “comparative”. Ricardo demonstrated that any given country could drive up its prosperity, not necessarily by being a world beater in any particular category of export, but simply by focusing on its resources on what it could produce most efficiently (whether because of the natural fertility of its land, or its abundant supplies of cheap labour or its technological resources).

The theoretical implication was that every nation could benefit from trade. Ricardo thus demolished the credibility of rival theories of “autarky”, the idea that a nation should consume only what it can itself produce, and “mercantilism”, the theory that one nation’s export represents another nation’s economic loss.

Economic historians have tended to present a united front on free trade’s merits in practice too. They disagree over how much economic damage Smoot-Hawley actually did on top of the monetary and fiscal policymaking blunders of the Great Depression of the early 1930s, but virtually none argue that protectionism and tariffs made things any better.

And, for the period since the Second World War, views are even more categorical. It’s widely agreed that the US Marshall Plan, which lent generously to the bombed-out economies of Europe and dismantled trade barriers, helped to lay the foundation for Germany’s Wirtschaftswunder (economic miracle) and France’s Trente Glorieuses (30 glorious years). China’s assimilation into the global economy after the death of Mao Zedong in the late 1970s, and its emergence as a global export powerhouse, has helped to yank hundreds of millions of Chinese out of destitution.

“The world trading system has been fundamental to the post-war success of the world economy which has seen large increases in incomes and, for the first time in history, an absolute fall in world poverty,” states L Alan Winters of Sussex University, neatly encapsulating the contemporary consensus of the profession.

Yet there are wrinkles in this story of all-conquering trade liberalisation as a driver of prosperity. Not everything fits neatly into the parable of comparative advantage. During their rapid industrialisation phases of the second half of the 19th century, countries such as Germany and the United States erected lofty tariff walls to protect their domestic manufacturers from intense competition from the industrial superpower of the day, Great Britain.

The Cambridge economist Ha-Joon Chang notes that most of today’s rich countries actually “practised significant degrees of protectionism for substantial periods” during the 19th and 20th centuries. Free trade advocates can say things might have been even better for these states, but there is little reason to conclude that protectionism held back Bismarck’s Germany or Ulysses Grant’s United States, at least to any significant extent.

And there are examples from the post-war era too. South Korea’s industrial takeoff in the 1960s happened behind high tariff walls. Japan protected its nascent domestic car industry from foreign competition for 40 years after the Second World War. It was a similar story in Taiwan. Again, there is little evidence that protectionism did major damage to these states; their growth rates were some of the highest in human history.

Indeed, a combination of trade barriers and industrial subsidies actually seemed to help these Asian nations reach their economic potential. Protecting industries like steel manufacturing and shipbuilding, this argument goes, builds industrial capacity, which can then be the basis for other higher-value added technological development. Protectionism enables “learning by doing” for domestic managers and the bureaucrats who set policy – opportunities that would not be available in a world of totally open trade.

As Ha-Joon Chang points out, South Korea’s apparent “comparative advantage” back in in the 1950s was in fishing and low-grade wig-making, not shipbuilding or consumer electronics. If South Korea had merely stuck to what it was good at 60 years ago and waited, would we today have Samsung? Would we have Toyota? Or Taiwan’s Acer?

Many are sceptical of any general applicability of such lessons for poor countries. And there are plenty of countervailing examples of developing states where protectionism has resulted in waste and corruption. Yet there is a powerful weight of historical evidence that a degree of protectionism can, under certain conditions and alongside certain other policies such as export promotion, play a positive role in development.

That is not the only wrinkle. We are not merely economic animals. The Harvard economist Dani Rodrik argues that it’s important to think about social fairness when it comes to trade, not just pure Ricardian efficiency effects.

Overproduction of steel in China, dumped in world markets at prices below the true cost of production for the past decade, might have meant cheaper inputs for Western manufacturing firms and thus more productive industry, extra aggregate jobs and higher incomes in rich countries. But when it undermines intangible but crucial “social bargains” between a Western government and its domestic steel workers, who risk losing their jobs because of cheap steel dumping, people quite reasonably feel aggrieved.

Similarly, if corporate offshoring occurs not because production is more efficient overseas but because companies take advantage of laxer health and safety regulations, that too can represent a breach of the broader public’s sense of fairness.

It was this sense of a broken social contract that Trump’s “American carnage” inaugural address touched on when he raged that “one by one, the factories shuttered and left our shores, with not even a thought about the millions upon millions of American workers left behind”.

So are these wrinkles enough to salvage some respectability for Trump’s protectionist crusade? Alas, no. America is on the technological frontier. Those “learning by doing” development effects are hardly relevant for the most productive economy in the world.

The social bargain argument does make a strong case for facing up to and tackling Chinese overproduction and other forms of industrial dumping – more than many economists and politicians accept. And this blind spot among the policymaking establishment is probably one of the reasons why populists like Trump have won an audience.

Yet the fact remains that tackling this evil can only be done sustainably through multilateral organisations like the World Trade Organisation. A free for all threatens the whole system, at huge potential economic cost.

Moreover, Trump’s anger over trade extends far beyond unfair dumping. He and his advisers want to keep out imports in general, under the primitive mercantilist believe that the raw size of the US’s goods trade deficit represents a measure of the extent to which America is being taken advantage of by swindling foreigners. Ricardo must be turning in his grave.

Back in 1929, the industrialist Henry Ford was one of those who pleaded with President Hoover not to impose Smoot-Hawley. But, when it comes to trade, the current White House incumbent seems to have absorbed a separate and simpler view expressed by Ford many years earlier: “History is bunk.”