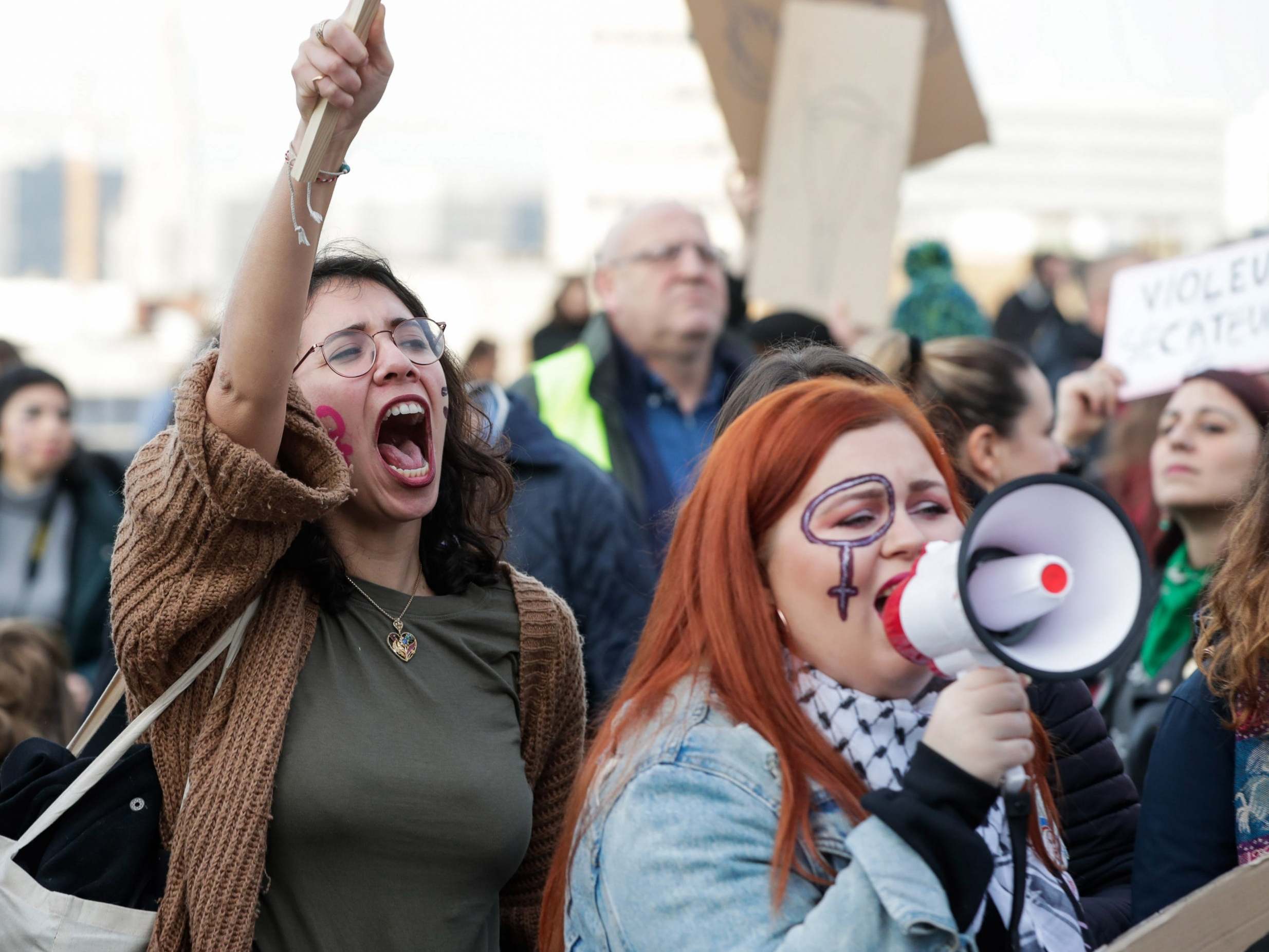 Women around the world have taken to the streets to call for an end to violence against them and commemorate the lives of those murdered by men.

Demonstrators gathered over the weekend to mark the International Day for the Elimination of Violence Against Women which falls on 25 November every year.

The day, which has been observed for 40 years and part of the UN calendar for 20, aims to shine a spotlight on the prevalence of rape and domestic abuse and other forms of violence which women endure.

According to the World Health Organisation, one in three women worldwide will experience physical or sexual violence at some point in her lifetime, mostly by an intimate partner.

Demonstrations were held in dozens of cities across France and the hashtag #NousToutes (which translates as All of Us) gained increasing traction.

Outrage has been mounting in recent months over femicide, which is defined as the gender-motivated killing of women, in the country.

France has one of the highest rates of murders connected to domestic abuse in Western Europe  – with at least 115 women killed by their partners or former partners this year alone. Campaigners are calling for the government to do more to tackle the problem.

The protests came ahead of French Prime Minister Edouard Philippe revealing a series of measures to tackle domestic abuse against women on Monday.

More than 10,000 people marched in Rome on Saturday to commemorate the International Day for the Elimination of Violence Against Women.

The demonstration comes after statistics released last week revealed 142 women were murdered in Italy in 2018 – a rise from 123 in the previous year.

Some 119 were killed by their husband, boyfriend or ex-partner. The murderers described themselves as being jealous and possessive in around a third of cases.

Campaigners say women’s rights are being radically rolled back in the country and retrograde, traditional stereotypes about the role of women are getting worse. Italy’s penal code called for short jail sentences for men who killed women due to jealousy just a generation ago.

Around 10,000 people took part in a protest in Brussels on Sunday demanding an end to violence against women – with demonstrators putting pairs of red shoes as an emblem of femicide victims outside the Palace of Justice and holding placards saying “That’s enough” and “Not one more life”.

Reclaim the Night marches were held around the UK on Saturday evening and protesters also called for an end to violence suffered by women. Reclaim the Night started in Leeds in 1977 as a reaction to women in West Yorkshire being instructed to stay inside because of murders perpetrated by the Yorkshire Ripper.

Marble Arch in central London will be illuminated in bright orange on Monday to mark the day – with the bright spectacle replicated across the world and buildings across Europe and in the US and Australia also transformed by orange hues.

Four women walked barefoot on Saturday in Mexico where they held a ceremony in commemoration of Briseida Carreno, a young woman who was killed a year ago in Ecatepec, a suburb northeast of Mexico City where there have been a high number of femicides.

Ten women are murdered each day in Mexico on average – with campaigners planning a number of protests to mark the International Day for the Elimination of Violence against Women.

Monday marks the beginning of 16 days of events campaigning to end gender-based violence and hundreds of events are planned across the world.

Phumzile Mlambo-Ngcuka, executive director of UN Women, said: “Rape isn’t an isolated brief act. It can have life-changing, unchosen effects – a pregnancy or a sexually-transmitted disease, immense trauma and an unwarranted sense of shame. In both conflict and in peacetime it often shapes women’s decisions to move from their communities through fear of attack or the stigmatization of survivors. If I could have one wish granted, it might well be a total end to rape.”

Marches, cycling rallies, marathons and art competitions are planned around the world as part of the 16 days of activism. Murals of positive gender relations will be painted on the streets of Malawi, classes on personal safety using Aikido martial art will take place at universities and secondary schools in Albania.

While an exhibition of films made by Latin American women accompanied by debates will happen in Honduras and hundreds of trees will be planted in Cambodia.

UN Women notes the precise figures of rape and sexual assault are very tricky to predict due to survivors being apprehensive about reporting incidents of violence.

But the organisation estimates approximately 15 million adolescent girls – aged 15 to 19 – across the world have endured forced sex at some point in their life. Three billion women and girls live in countries where rape in the context of marriage is not explicitly criminalised.

“Despite worldwide mobilisations led by survivors and activists in recent years through movements such as #MeToo, #TimesUp, #Niunamenos, #NotOneMore, #BalanceTonPorc, and others, sexual violence continues to be normalised and embedded in our social environments,” UN Women says.

“Violence against women and girls continues in every country. From the trivialising of rape, victim-blaming, the objectification of women’s bodies in movies or TV, the glamorisation of violence in ads, or the constant use of misogynistic language, we are all daily witnesses to this rape culture, sometimes even silent bystanders, and have a responsibility to stop it.”