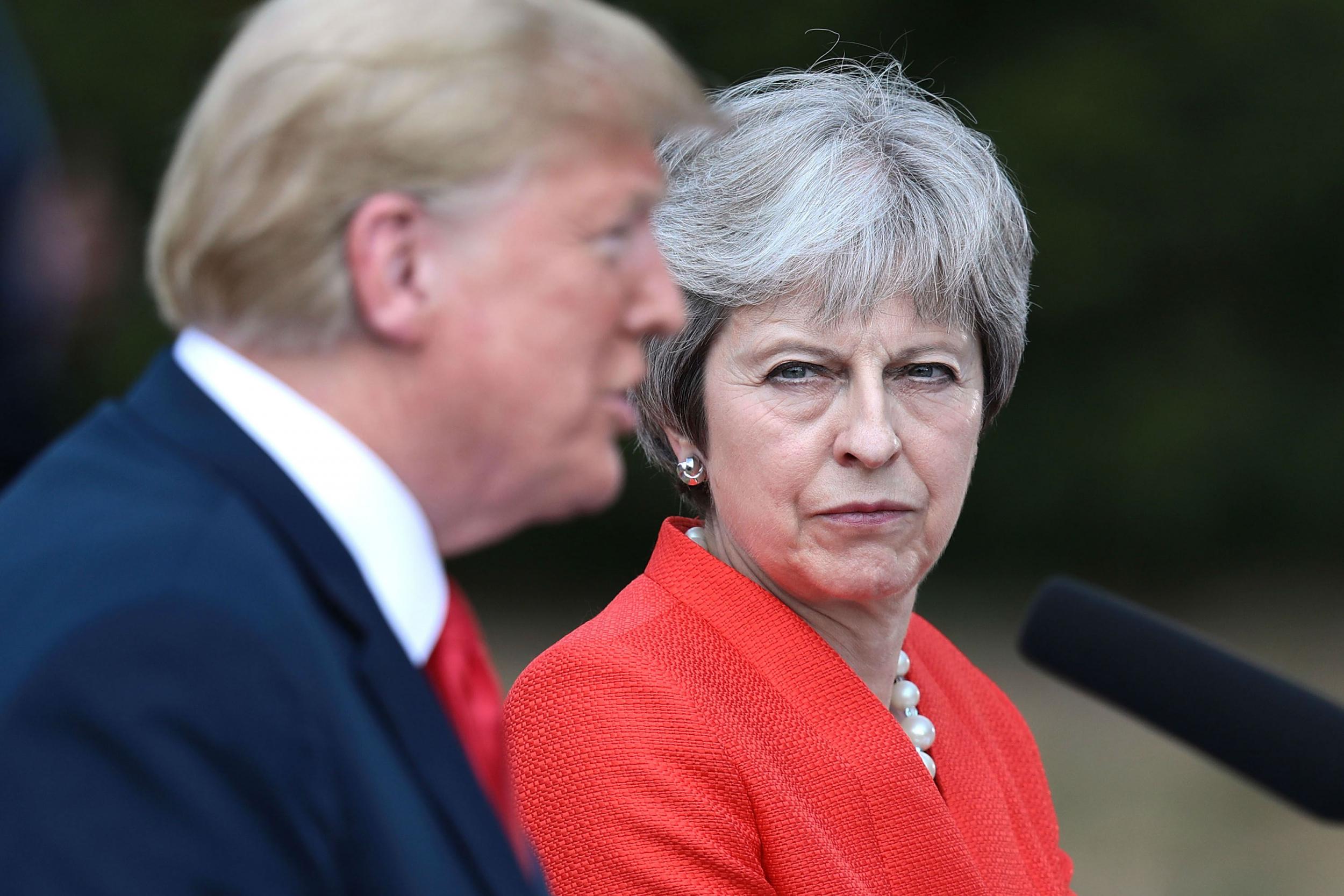 Theresa May and Donald Trump had just concluded what had apparently been a warm and friendly black-tie dinner at Blenheim Palace, when the British prime minister received a journalistic nightcap, she could have done without.

Having sat smiling amid the English Baroque splendour that is the birthplace of Sir Winston Churchill, dining on smoked Scottish salmon and Hereford beef fillet, the British and US leaders had parted company.

But moments later, the world learned via the front page of The Sun, Britain’s best-selling, populist tabloid, that Mr Trump did not think much of his host’s recently announced Brexit strategy, that it might stop Britain securing a bilateral deal with Washington, and that he bore warm feelings for Boris Johnson, Ms May’s longtime arch-enemy, who days before had quit as foreign secretary.

Here’s how you stand up to Trump, Theresa


“Well, I am not pitting one against the other. I’m just saying I think he would be a great prime minister,” Mr Trump told the newspaper. “I think he’s got what it takes.”

Even for those accustomed to the chaos and bedlam of Trumpland, the president’s staggeringly unhelpful and undiplomatic interview about which Downing Street had no advance warning came as a thunderbolt. His press secretary Sarah Sanders rushed, not for the first or last time, to clean up the mess, issuing a statement to say the “president likes and respects Prime Minister May very much. As he said in his interview with The Sun, she ‘is a very good person’.”

“Europe is seeing the real Donald Trump – unmanageable, tempestuous, careless, egomaniacal, and petty,” said Larry Sabato, Professor of Politics at the University of Virginia. “There are few if any internal or external controls on him. The staff is there for his comfort and coddling, and to perform cleanup duties after he makes messes.”

Mr Trump, naturally enough, has friends in powerful places and access to platforms and media outlets all too willing to present his worldview. His interview with The Sun had apparently been arranged by his longtime supporter Rupert Murdoch, the 87-year-old executive chairman of News Corp. One source at the company said the interview “came from the big man”.

With the support of outlets such as The Sun, the New York Post, Fox News and the editorial pages of the Wall Street Journal, Mr Trump’s comments on issues such as Brexit and the alleged perfidy of London Mayor Sadiq Khan receive huge, largely uncritical coverage. (A report by a Fox News correspondent in London on Thursday night, trying to find supporters of the president, was close to parody.)

He also has the support of others, such as Piers Morgan and Nigel Farage, whose platforms are not so vast, but whose backing has often been important.

Mr Farage said on Friday he had not spoken to Mr Trump about his interview with The Sun, but said he agreed with what he had said about Ms May. “I think her government is probably finished anyway, and this interview could contribute further to it.”

One of the most telling insights into the way Mr Trump operates came from The Sun reporter who conducted the interview with him on Wednesday in Brussels, where he was attending the Nato summit.

Tom Newton Dunn, the newspaper’s political editor, said Ms Sanders, the White House press secretary, had tried to wrap up the interview after the pre-agreed 10 minutes but that he “swatted her away and kept on talking”.

“Nobody tells him what to say [and] nobody tells him off once he’s said it, and he’ll say it for as long as he wants,” he told the BBC. “I felt it was like being in the court of an imperial Chinese emperor from the 15th century.”

Before he left Brussels, where he pressed Nato leaders to increase their military spending, Mr Trump oversaw an unscheduled and frequently wild 35-minute press conference, which he reportedly held against the advice of US State Department officials. Having berated America’s supposed allies, Mr Trump was asked about Russian President Vladimir Putin, with whom he is to meet next week in Helsinki.

“Somebody was saying, is he an enemy? He’s not my enemy. Is he your friend? No, I don’t know him very much,” Mr Trump said. “Hopefully, someday, he’ll be a friend. It could happen.”

On Friday, in a joint press conference at Chequers, Ms May’s official country residence in Buckinghamshire, before he left for Windsor Castle – avoiding the huge anti-Trump protests in London – and a meeting with the Queen, Mr Trump appeared to partly acknowledge the problems he had created for her. He also decided it was down to him – and not his communications staff – to try and correct things.

He added: “When I saw her this morning, I said ‘I want to apologise, because I said such good things about you’. She said ‘Don’t worry, it’s only the press’.”

Long-term students of the former host of The Apprentice know Mr Trump believes nobody does a better job of speaking on his behalf than him. During the 2016 presidential election campaign, an old audio recording was obtained by The Washington Post which suggested very strongly that during the 1980s and 1990s, Mr Trump posed as “John Miller”, and claimed to be a press spokesman for the tycoon who was frequently the subject of tabloid stories.

In a recording from 1991, “John Miller” explained to a reporter from People magazine why Mr Trump had ended his relationship with Marla Maples and allegedly started one with model Carla Bruni, having ended his 12-year marriage to Ivana Trump. (Ms Bruni has always denied they had a relationship.)

“He really didn’t want to make a commitment,” the supposed spokesman said. “He’s coming out of a marriage, and he’s starting to do tremendously well financially.”

Once he entered the White House, it was clear the president still preferred to speak for himself, especially if the person assigned to spin for him was getting too much positive press. Sean Spicer, Anthony Scaramucci, Sebastian Gorka, and Steve Bannon were among more than a score of firings and departures from the White House over the president’s first 18 months.

Tim Miller, a Republican operative and the former communications director for Jeb Bush’s 2016 presidential campaign, said of Mr Trump’s style and his habit of spinning 180 degrees on issues as it suits him: “As a Trump watcher it is pretty obvious that his prepared remarks are completely different in tone and content from what he delivers off the cuff in most cases.”

He added: “And Trump is also responsive to whoever he spoke to last and his off-brand unwillingness to be confrontational in person. Hence, trashing May to The Sun and then backing down in the press conference.”

Many who voted for Mr Trump did so because of his non-conformist style, his willingness to shake things up and say uncomfortable truths. Those people admire his deliberate foregoing of diplomacy.

But some of those who have spent their lives working to promote America’s interests abroad, namely professional career diplomats, fear that while the president’s unguarded, unilateral approach may please his base, it has the ability to do much harm.

Former ambassador Daniel Fried, who served as assistant secretary of state for European and Eurasian affairs and a former US ambassador to Poland, said even if Mr Trump chose to be his own messenger, he could not understand why he appeared to go out of his way to antagonise America’s allies while softballing with leaders such as Mr Putin.

“The trouble with unpredictability is that is can become unreliability. You don’t know when you are going to need allies,” said Mr Fried, a Distinguished Fellow at the Atlantic Council in Washington.

“I was in the national security council on 9/11 with Condi Rice and the following days when she needed to ask Nato to trigger Article Five [which lays out the principle of collective defence].”

He added: “How does it serve America’s interests when you create a situation where your allies don’t want to help you? What purpose does it serve when those leaders have an interest in saying no to America?”