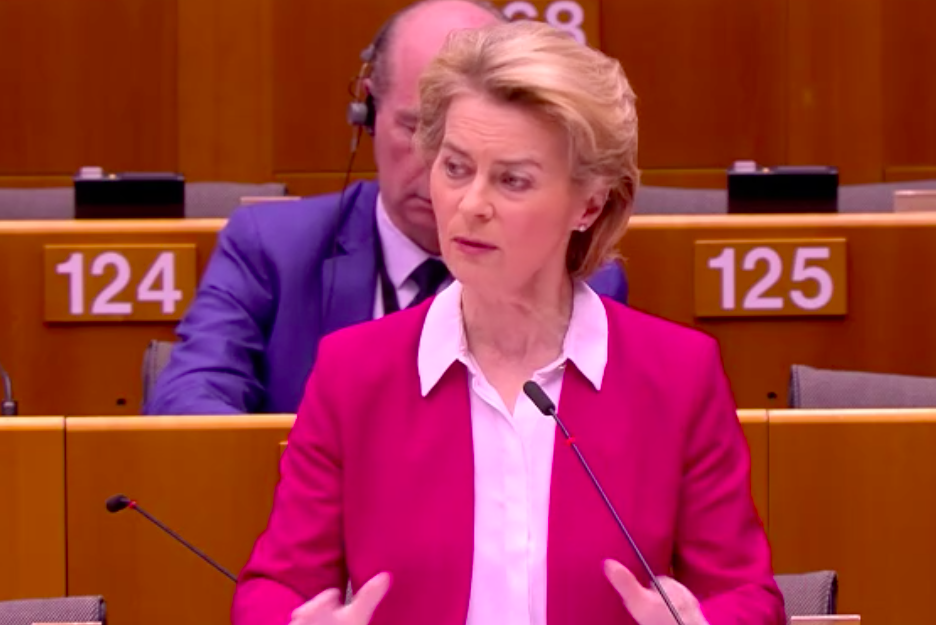 The president of the European Commission has criticised EU member states for throwing up border controls to each other during the coronavirus pandemic.

Her call comes on the 25th anniversary of the EU’s passport less Schengen area, which was established in its current form on this day in 1995.

“A successful European response can only be coordinated if our internal market and our Schengen area work the way it should: a crisis without borders cannot be resolved by putting barriers between us,” she told a mostly empty European Parliament in Brussels, from which MEPs were following from home.

“And yet, this is exactly the first reflex that many European countries have: this simply makes no sense – because there’s not one single member state that can meet its own needs when it comes to vital medical supplies and equipment. Not one.

“The free movement of goods and services is therefore our strongest and frankly our only asset to ensure that supplies can go where they are needed most. It makes no sense that some countries unilaterally decided to stop exports to others in the internal market. This is why the commission intervened when a number of countries blocked exports of protective equipment to Italy.”

As of this week all EU member states other than Ireland have imposed border restrictions of some kind – with 10 having their frontiers fully closed and 16 partially closed.

A European Commission report says that at some borders, waiting times for goods, including medical supplies, is exceeding 24 hours. There have been reports of 34-mile long queues of lorries on the German-Polish border.

“The scale of the outbreak is stretching them to the breaking point. They urgently need the right equipment, they need the right amount of it, and they need it right now. But instead of that what we saw was crucial equipment stuck in bottlenecks at borders for days. This is why we had to take matters into our own hands as far as we could to release these blockades.”

The Commission has proposed “Green lanes” for freight to pass through borders unhindered and ordered the lifting of particular export controls on medical equipment.