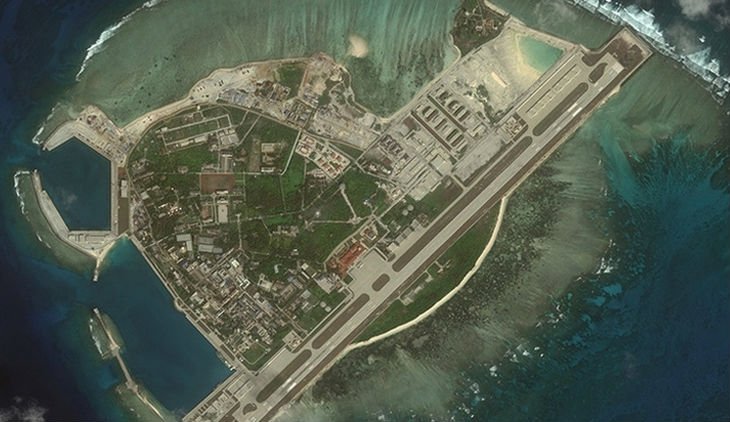 China is expanding its military presence in the South China Sea in order to intimidate and coerce its neighbours, the US’s most senior defence official has claimed.

“China’s policy in the South China Sea stands in stark contrast to the openness that our strategy promotes, it calls into question China’s broader goals,” said James Mattis, the US defence secretary.

“The US will continue to pursue a constructive, results-oriented relationship with China, cooperation whenever possible will be the name of the game and competing vigorously where we must of course we recognise any sustainable Indo-Pacific order has a role for China.”

The comments by Mr Mattis at a the annual Shangri-La Dialogue in Singapore, highlight several things about the shifting dynamics in the Asia Pacific region, a part of the world where the US has long considered itself the dominant military power.

Amid China’s growing military and economic strength, and with the uncertainty about the US’s global role under the “America First” doctrine espoused by Donald Trump, things are changing.

With the US focussed on trying to broker a peace deal with North Korea, one that would satisfy its allies Japan and South Korea, Washington is also trying to balance how to make use of China’s diplomatic cooperation with its military and strategic threat in a part of the world where are least seven nations – China, Taiwan, Vietnam, Malaysia, Indonesia, the Philippines and Brunei – have competing claims.

Mr Mattis specifically highlighted Beijing’s militarisation of artificial islands in the South China Sea, home to some of the world’s busiest sea lanes.

“Make no mistake: America is in the Indo-Pacific to stay. This is our priority theatre,” Mr Mattis said, according to Reuters.

“We are aware China will face an array of challenges and opportunities in coming years, we are prepared to support China’s choices if they promote long-term peace and prosperity for all in this dynamic region.”

Mr Mattis, who also said the issue of US troops in South Korea was “not on the table” at the June 12 summit with North Korea’s Kim Jong-un, spoke against a backdrop of growing tension between the US and China over trade.

US Commerce Secretary Wilbur Ross is currently in Beijing, trying make progress on the various demands the countries are making of each others.

Politico said that for the US, the focus was on narrowing the trade deficit, cracking down on China’s state backing of high-tech sectors, and protecting the intellectual property of US companies.

Meanwhile, China’s top priority was to persuade the US administration to back off harsh penalties on Chinese telecommunications giant ZTE, ease threats to impose tariffs and reduce export restrictions.

Last month, China’s air force landed bombers on the disputed islands and reefs in the South China Sea as part of a training exercise, triggering concern from Vietnam and the Philippines.

Satellite images showed that China had landed bombers on Woody Island in the Paracel Islands, prompting US claims it was destabilising the region.

“Despite China’s claims to the contrary, the placement of these weapon systems is tied directly to military use for the purposes of intimidation and coercion,” Mr Mattis said.

Reuters said that Lt Gen He Lei, the head of the Chinese delegation, said the islands were Chinese territory and it was “a sovereign and legal right for China to place our army and military weapons there”. He also suggested Mr Mattis’ comments were “irresponsible” and would not be accepted.

“We see any other country that tries to make noise about this as interfering in our internal affairs,” said Mr He, deputy president of the Academy of Military Sciences at the People’s Liberation Army.