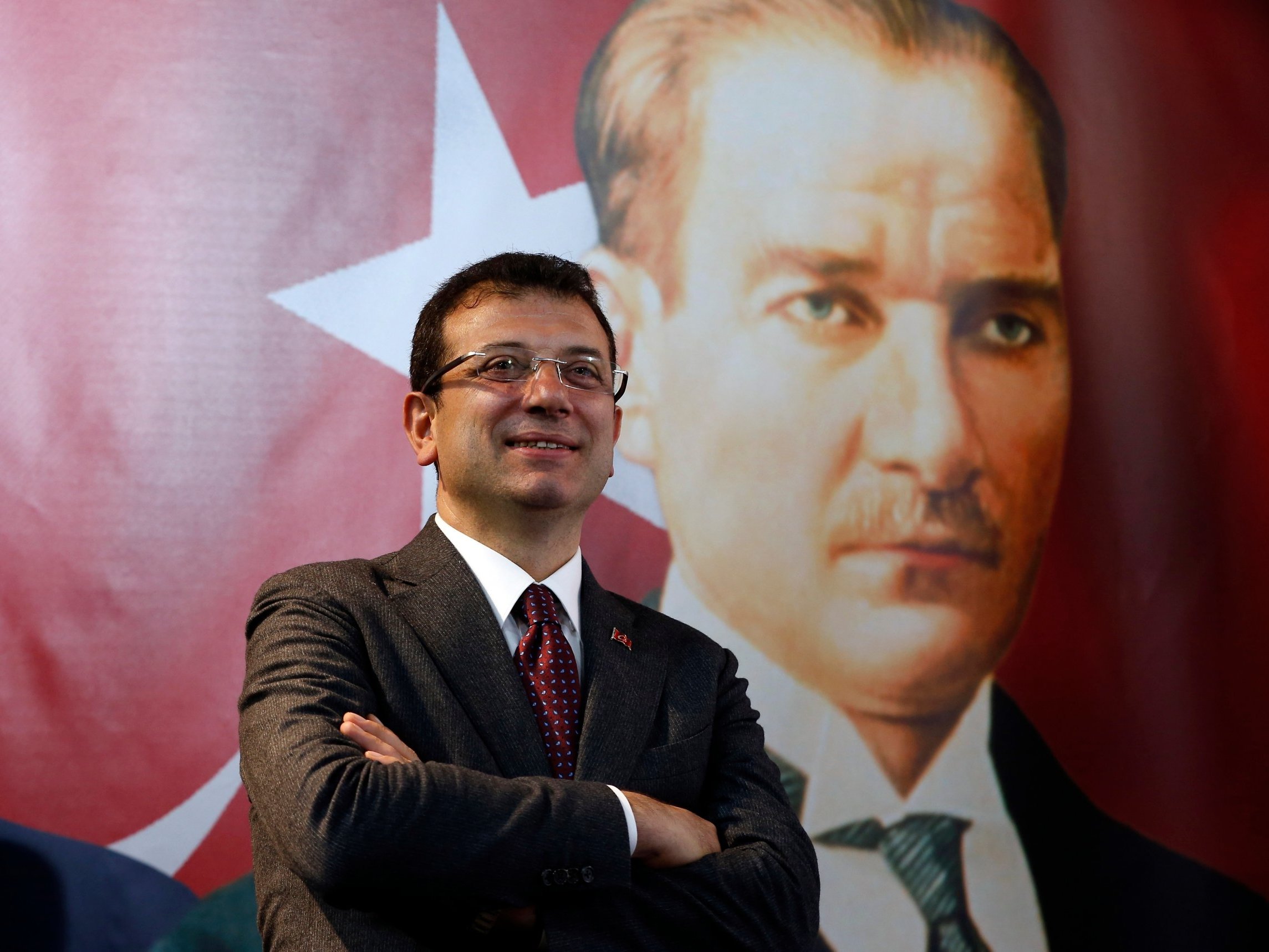 You might be sad but do not lose your hope. We are here, do not ever give up!” said Ekrem Imamoglu. He is still in high spirits, even after his mandate as Istanbul’s newly appointed mayor was revoked last week by Turkey’s Supreme Election Board.

“Our path is a long one. Our excitement is at peak. We have our youth. We are the Turkish youth, thirsty for justice and fully committed to democracy. Nobody can stop this nation, its freedoms, its democracy.”

The heated speech by Imamoglu, of the opposition CHP, was aired live on social media outlets and reached a record number of more than 3 million viewers that night. Meanwhile, almost all national channels, owned by pro-government businesses, ignored the broadcast.

Official news bulletins focused on the claims by the Justice and Development Party (AKP) of “irregularities and corruption”, which were cited by the board in its decision for a rerun of mayoral elections. The vote will be held on 23 June.

In a televised speech the next day, Recep Tayyip Erdogan, Turkish president and chair of the AKP, insisted there had been improper appointments of some election officials and claimed some had links to terror groups.

“The documents we’ve presented are quite solid and based on concrete evidence, which cannot be disputed,” said Erdogan.

“We sincerely believe there was organised corruption and irregularities.”

Imamoglu, the Republican People’s Party (CHP) candidate, however, denounced the decision as politically motivated and highlighted alleged discrepancies in the government’s own claims.

Even though his full address never made it to mainstream channels, social media experts claim that such a dismissive approach by the government, combined with Imamoglu’s tech savvy methods of publicising his message, would boost his popularity on and offline before the rerun.

“Ekrem Imamoglu’s attitude both on the night, and in the aftermath of the March 31 elections, of focusing on facts, created the perception among opposition voters that ‘if he’s speaking, he must know what he’s speaking about’,” says Can Selcuki, general manager of Istanbul Economics research firm.

“They started to feel hope in his speeches and that’s what doubled the interest [last night].”

It was not the first time the young politician had garnered such large online crowds.

On election night in March, the opposition politician used his Twitter account as a private news channel and aired 11 live press briefings after the semi-official Anadolu Agency cut its coverage, lapsing into silence for nearly 12 hours at a pivotal point in the contest.

The number of Imamoglu’s followers, now 2.3 million, reached 869,000 from 382,000 overnight. His live feeds were viewed over 449,000 times by the time of the decision on a rerun, according to Medyascope, an online news outlet. The same night, his name was the third top Twitter trend worldwide.

An average post by the young leader receives an audience of around two million, public online data shows.

The soft-spoken politician’s motto, #HerseyCokGuzelOlacak, “Everything will be fine,” has struck a chord, inspiring numerous impartial voices in Turkey’s halls of finance, arts and sports to come out in support of Imamoglu before the rerun.

President Erdogan expressed his disdain for sports fans who chanted Imamoglu’s slogan at stadiums last week as he attended a Ramadan dinner in Istanbul on Sunday.

“It was us who built these stadiums,” he said. “We cannot accept this.”

The new vote in Istanbul is as much about the leader’s seemingly threatening undertone, compared to Imamoglu’s embracing talk, as it is about the future of Erdogan’s current government, political analysts argue.

Once a name unknown to the majority in Turkey, Imamoglu has used social media to introduce himself and spread his word, often airing scenes from his daily life – shopping in the local market, dining with his family, visiting community centres. By broadcasting the seemingly mundane, he has successfully engaged the internet generation.

In three short months, he came to be referred to as the “rising star” of Turkish politics.

For two weeks during his short-lived appointment as mayor, he made a historical move to broadcast Istanbul municipality assembly meetings live on Facebook, YouTube and Twitter, keeping his promise of continued transparency. Sure enough, the public took note.

Even on a Wednesday morning when most people would be busy at work or otherwise occupied with daily life, a live broadcast during which ruling party members rejected a drug prevention commission saw a record number of more than 1.5 million viewers.

Shorter clips of the vote circulated even more, perhaps helped by the many puzzled reactions as to why a religiously conservative party would oppose an anti-drug initiative.

Some argued it was the governing party’s strategy to avenge the unexpected win of the opposition by blocking the new mayor’s moves, while its supporters argued such a commission should not be part of the municipality remit.

Imamoglu, the original architect of this open debate, has vowed to continue the dialogue among polarised political groups under absolute online transparency.

Such a digital strategy had long been brewing when Imamoglu’s Republican People’s Party, the CHP, and other opposition groups were widely denied exposure in Turkey’s mainstream, pro-government media.

A study by an online diversity platform showed that in 2017, before a critical referendum, President Recep Tayyip Erdogan appeared on national TV channels for 53 hours compared to the 17 hours of the CHP leader and the 33 minutes of the pro-Kurdish People’s Democracy Party.

Freedom of expression has slumped in recent years; more than 150 journalists have been jailed, most since the failed coup of 2016. Recently, the Paris-based Reporters Without Borders ranked Turkey 157th out of 179 in their 2019 World Press Freedom Index.

Imamoglu, as well as other opposition candidates, took to Facebook, Twitter and YouTube to reach over 57 million voters and connect with their constituencies – because there was no other realistic alternative.

“Social media makes a jump at times when the mainstream media fails to serve its purpose – it’s as clear as that,” says Tirse Erbaysal Filibeli, head of Istanbul Bahcesehir University’s New Media department.

“Imamoglu’s live feeds and information flow on social media make a difference in terms of transparency and credibility as you cannot manipulate anyone if they have first-hand access to information.”

Although the number of interactions appears remarkable in a media landscape where opposition figures would otherwise have no exposure, digital analysts nonetheless warn against over-interpreting social media’s impact on changing people’s beliefs or behaviour.

“It’s truly a microcosm of people thinking alike, passing on their content,” said Mehmet Atakan Foca, a founder of teyit.org which tracks disinformation online. “So, it’s not the place to [check] the pulse of a country of 82 million.”

Yet in a young population such as Turkey, the 90.7 per cent internet access among 16 to 24-year-olds, as registered by the Turkish Statistics Institute in 2018, remains an attractive prospect for all political actors, as well as international media outlets.

The shared platform, named after the international dialling code for Turkey, was “forward looking to the future of the media”, said Peter Limbourg, director general of Deutsche Welle, the driving force behind the initiative, speaking at a press conference in Istanbul.

“If you look at the sheer amount of Turkish language on Twitter, YouTube, not to even mention Facebook accounts, obviously Turks are very exciting; they know what’s going on,” added Gallagher Fenwick, the head of France24 English.

“So, obviously, this is an extremely exciting market for that reason.”

But even in the most vibrant internet environment, well-budgeted and coordinated digital campaigns are still doomed to fail unless supported by strong politics and politicians with convincing messages, experts argue.

“His success came as a reflection of the reaction he caused in offline politics, because he was a better politician than previous candidates.”

Now, CHP’s Imamoglu and his team are set for another challenge – but this time they have an established base of millions of supporters, flamed by a profound sense of injustice, say campaign organisers.

“Since the news on a rerun, people from almost all parts of society have pursued a ‘digital initiative’ putting forward some kind of personal political campaign. Thus, there is no longer an organised campaign in place but an organic one,” says Cagri Isiklioglu, one of the leaders in the nationwide social media campaign for the CHP.

“At this point the most important thing is to ensure the security of the ballot boxes on 23 June.”

Imamoglu won’t get things his own way, however, even online. Instagram has become a leading news outlet, with the opposition star attracting over 4 million followers on the social media tool.

But President Erdogan, who admittedly has been a political figure for over three decades, has 5.4 million followers on the platform. Then again, his candidate for the Istanbul mayoralty is at only 337,000.

With the race back on to determine the next administration of one of Europe’s largest cities, with a budget of $4bn, online platforms are taking pole position insofar as Imamoglu’s ability to engage with voters is concerned.

“From now on, online platforms will surely play a greater role in politics because we have entered into a new period of transparency,” Selcuki says.

“After all, [the opposition] have no other choice – social media is the strongest tool they’re left with.”