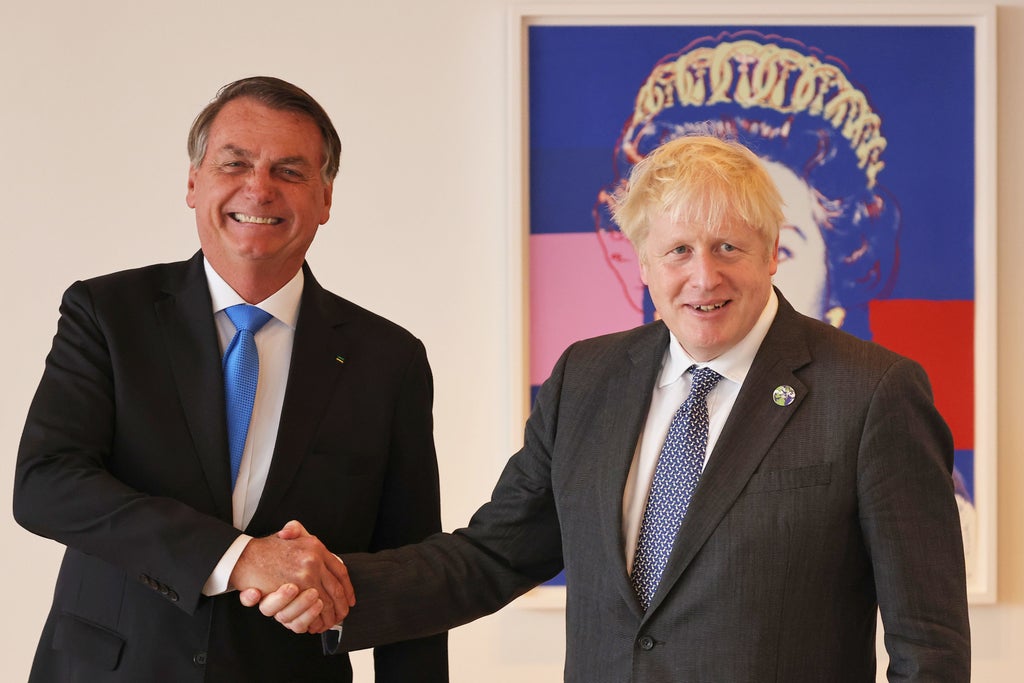 Boris Johnson said he was “delighted” to meet Brazilian president Jair Bolsonaro but urged the vaccine-skeptic right-wing populist to get jabbed against Covid-19.

Joined by the new foreign secretary, Liz Truss, at the British Consulate General’s residence in New York, the prime minister said he had promised to come to Brazil before the “bummer” of the pandemic.

Mr Johnson added: “But we’re working together on the vaccines. AstraZeneca it’s a great vaccine. I have AstraZeneca.”

As the press were ushered out of the room at the end of the bilateral meeting, Mr Johnson told them: “Thanks everybody, get AstraZeneca vaccines.”

He turned to Mr Bolsonaro and said: “I’ve had it twice.”

Mr Bolsonaro, who has made strange claims about vaccines including that they could turn people into crocodiles, pointed at himself and wagged his finger.

“Not yet,” he said through an interpreter, before laughing. Both men were maskless throughout the exchange.

They discussed their own fights against coronavirus infections, before Mr Bolsonaro bragged he had developed ”excellent“ immunity to the disease.

Mr Bolsonaro, who has courted publicity over his anti-vaccine stance, arrived in New York on Sunday ahead of the 76th United Nations General Assembly, when he was pictured eating a slice of pizza on the street with Brazilian ministers and aides – reportedly after falling foul of local rules for unvaccinated diners.

He has been condemned in Brazil for falling ill with Covid after his own resistance to many public health measures to control the virus, which has seen Brazil among the worst hit by Covid in South America and around the globe.

Separately, Mr Johnson told world leaders he is growing “increasingly frustrated” that their commitments to tackle the climate crisis are “nowhere near enough”.

The prime minister warned during the UN meeting that the gap between what industrialised nations have promised and what they are actually delivering remains “vast”.

Mr Johnson had been expected to challenge Mr Bolsonaro, a notorious climate change sceptic, on deforestation during the New York trip.